Last night I was looking through these pictures from my eldest son’s third birthday party and tearing up to think that he and many of his little friends are now starting kindergarten! Their their little baby faces are gone– replaced with eyes shining with curiosity and minds running full speed ahead as they are learning and growing too fast.

My son may be obsessed with dinosaurs and transformers now, but it wasn’t so long ago that all he did was play with his tools all day. From before his second birthday, he gravitated towards any and all tools. Of course, we started him with the plastic variety, but it wasn’t long before he was starting his collection of real tools and using a little screwdriver to remove the screws from doorknobs and hinges. 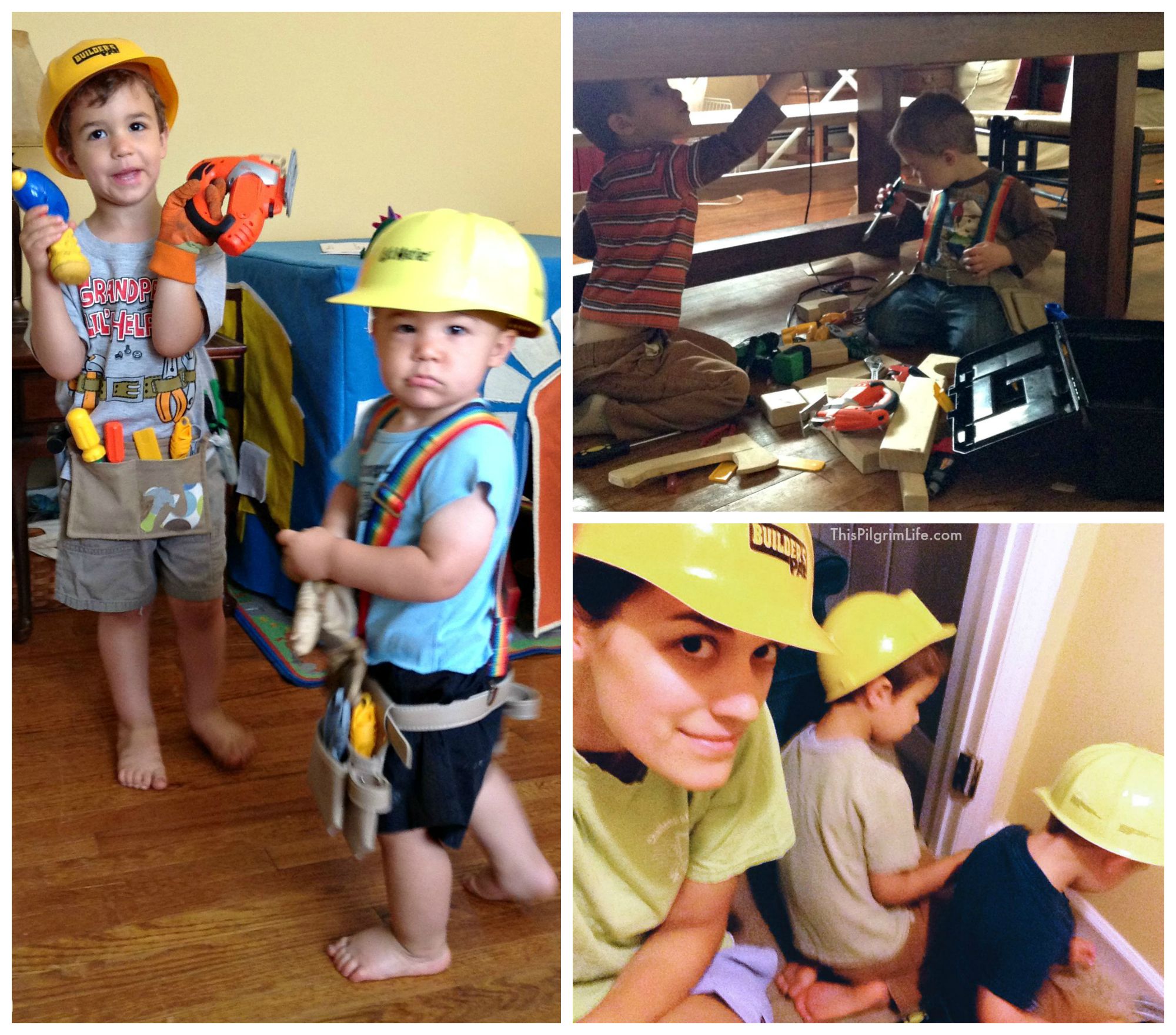 He loves tools and he is really good at using them. Even as a toddler, he had enviable accuracy with a hammer.

So when his third birthday was approaching, I started planning a party all about tools. And I think it may be my favorite party we’ve ever had!

My son’s birthday is in June, and with our carport and shaded backyard, it makes the perfect occasion to invite all our friends. Whole families are invited to come and play. It’s a great time to catch up with friends we don’t get to see often and I LOVE seeing all the kids run around the yard.

Generally, I like to minor on decorations and major on a few fun activities and food to feed our guests. Not to mention, just a couple weeks before the party I found out I was pregnant with our third child. So some things I may have wanted to do needed to get nixed due to first trimester “fun”.

For this party, all the decorations I managed was the caution tape I hung around our carport!

Dress for the Job- Gifts for the Guests

When possible, I LOVE being able to make party favors for our friends that will be used long after the party has ended.  I learned this from my friend Betsy when my son was invited to a knights and princesses party for her daughter’s birthday. My boys still use the chainmail shirt to dress up as knights. Four years later.

I made simple tool belts for the kids who were old enough to wear them. I used colorful duck cloth from my fabric stash and my husband fashioned belt rings from nails. (Because buying D-rings for all those tool belts was not in my party budget). I was impressed and so thankful for his handiwork.

that I found on Amazon in a 12-pack. Each child also was given one tool and a carpenter’s pencil in their tool belt. The tools came from two assorted sets I found at Target. 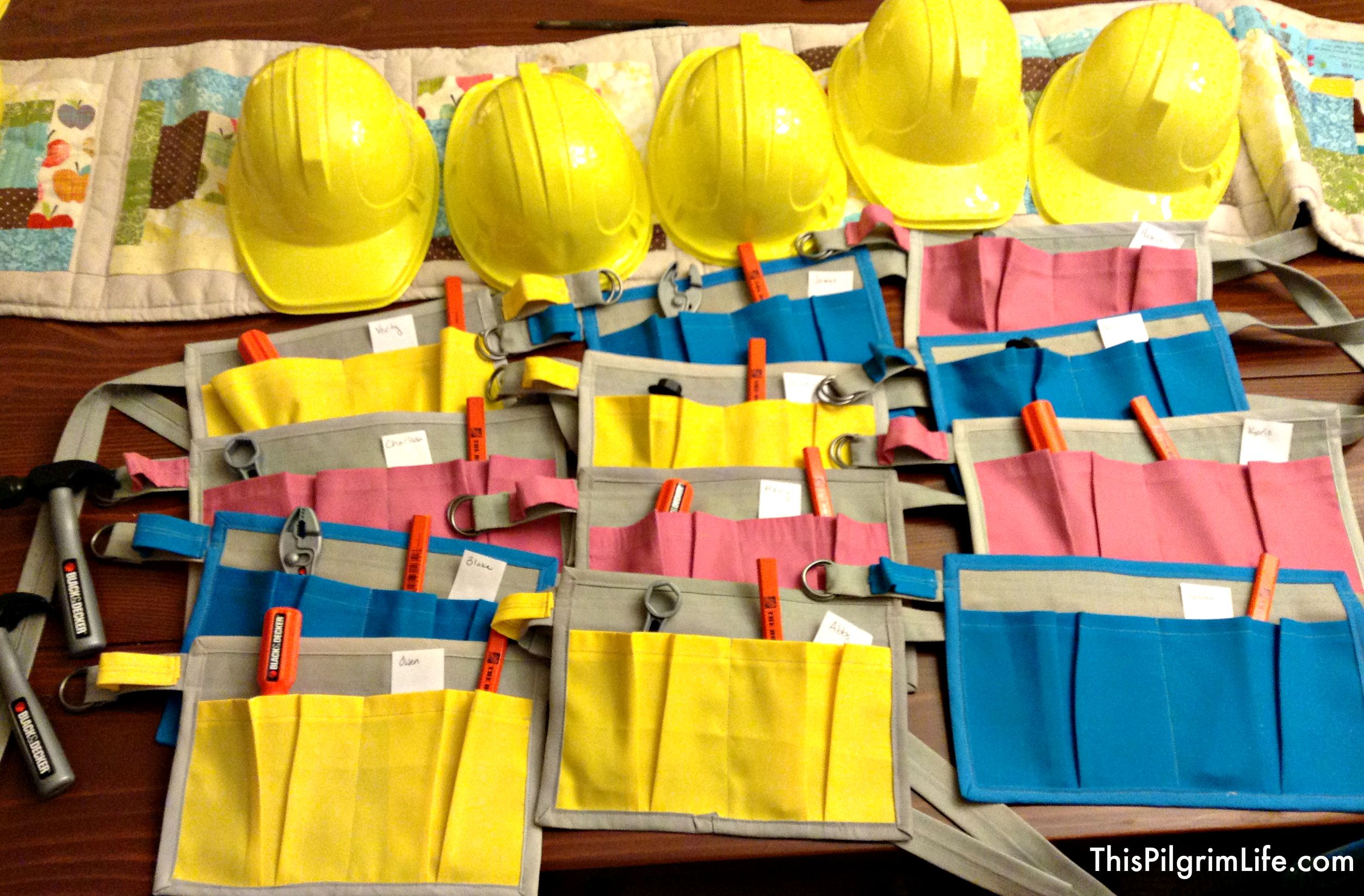 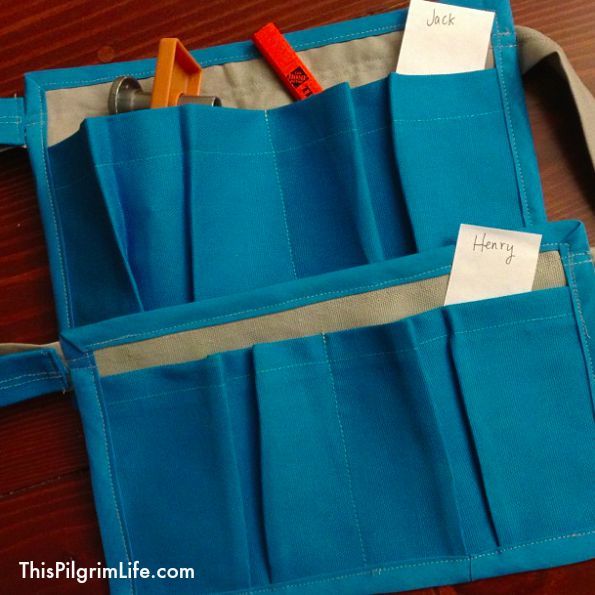 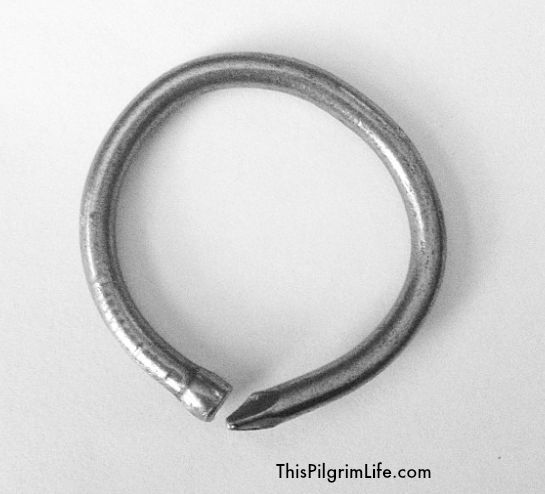 The big event of the party, besides the cake and presents of course, was building birdhouses together.

My husband used a simple birdhouse hanging in our yard as a template. Then he cut out all the pieces and pre-drilled nail holes to make assembly easier.

During the party, he used his booming voice to guide the kids (and their helpers) through the few steps required to make the birdhouses. All the kids were supplied with child-sized hammers which Lowes hardware store kindly donated for our party.

Each family took home one birdhouse to paint and hang in their yards! 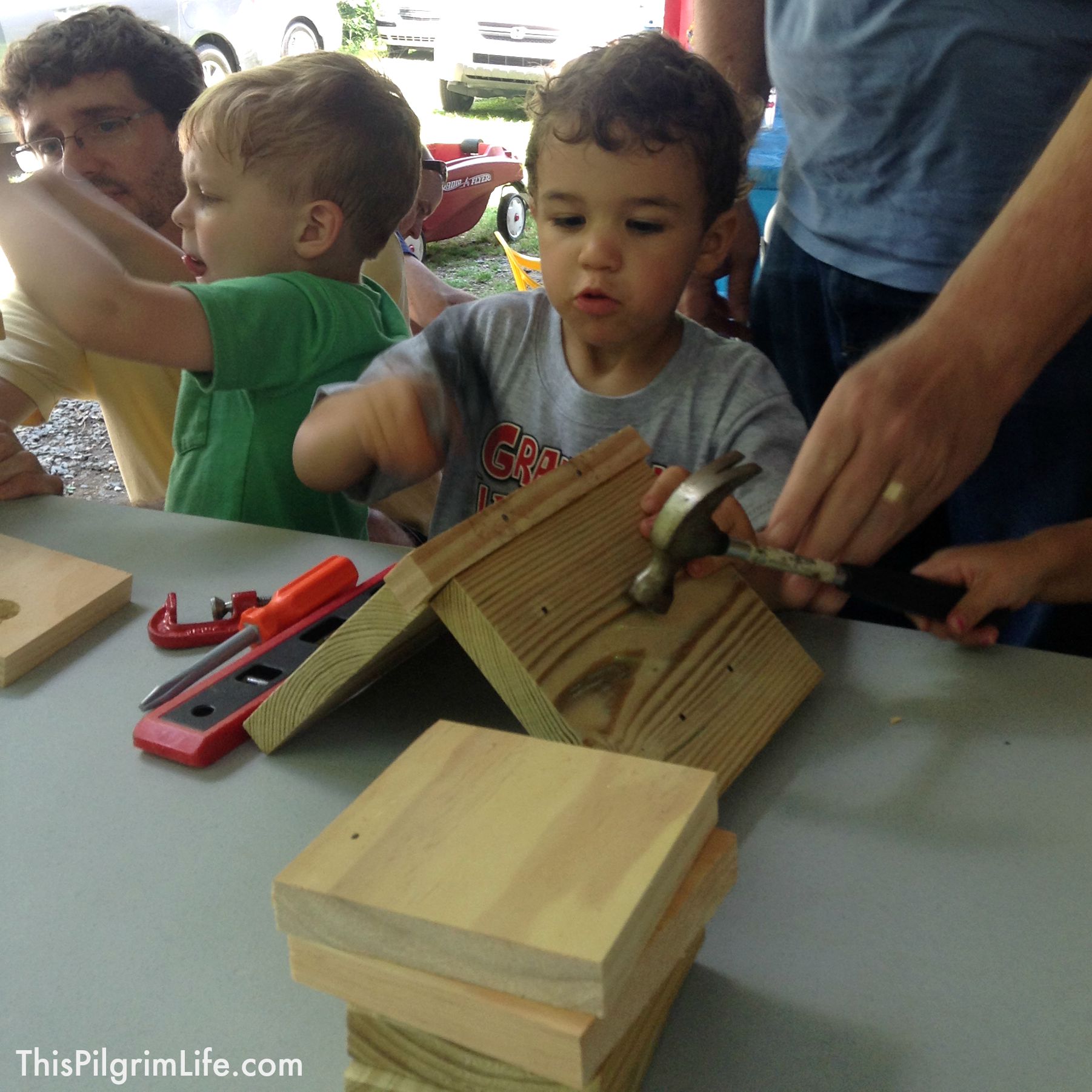 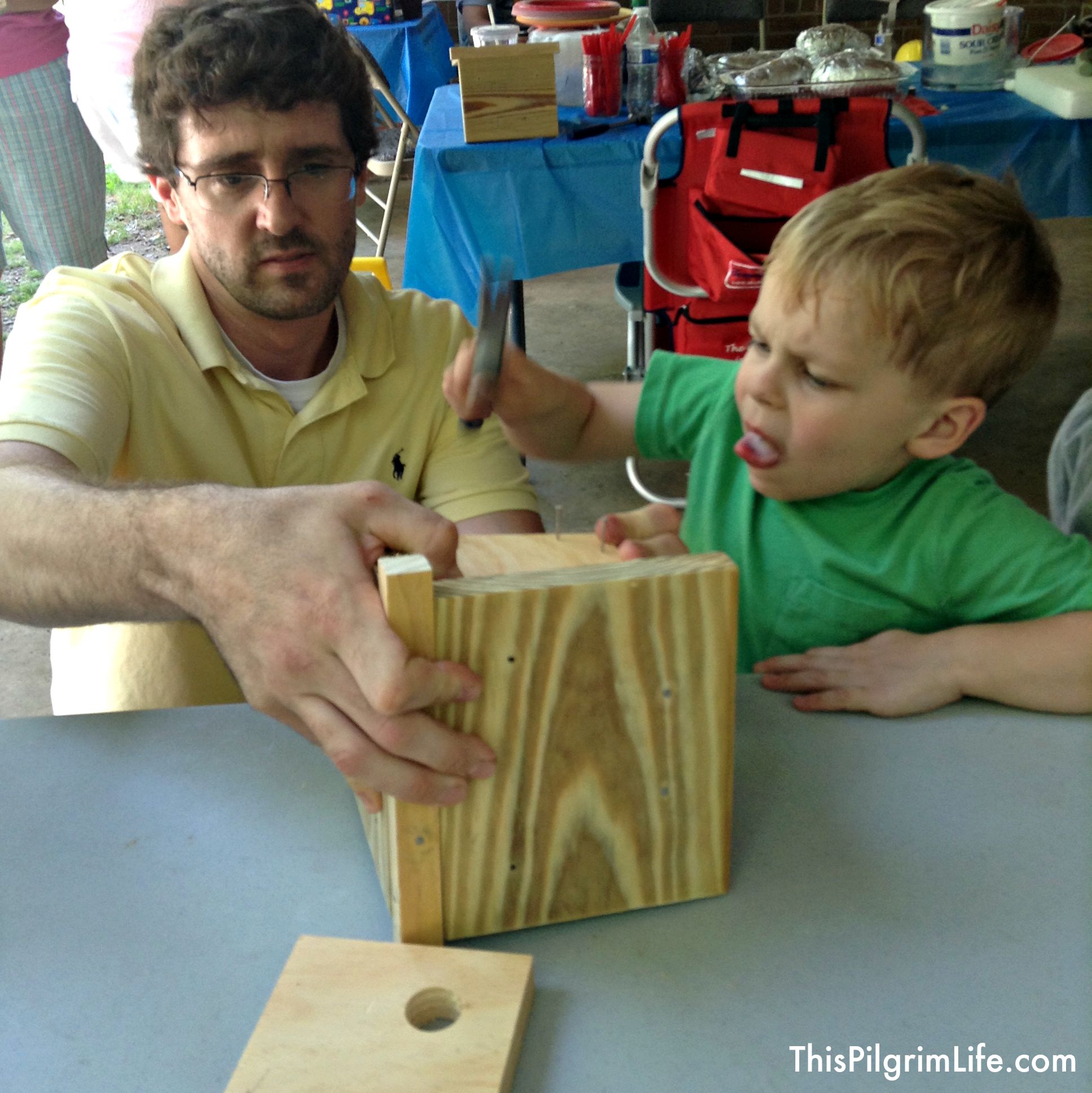 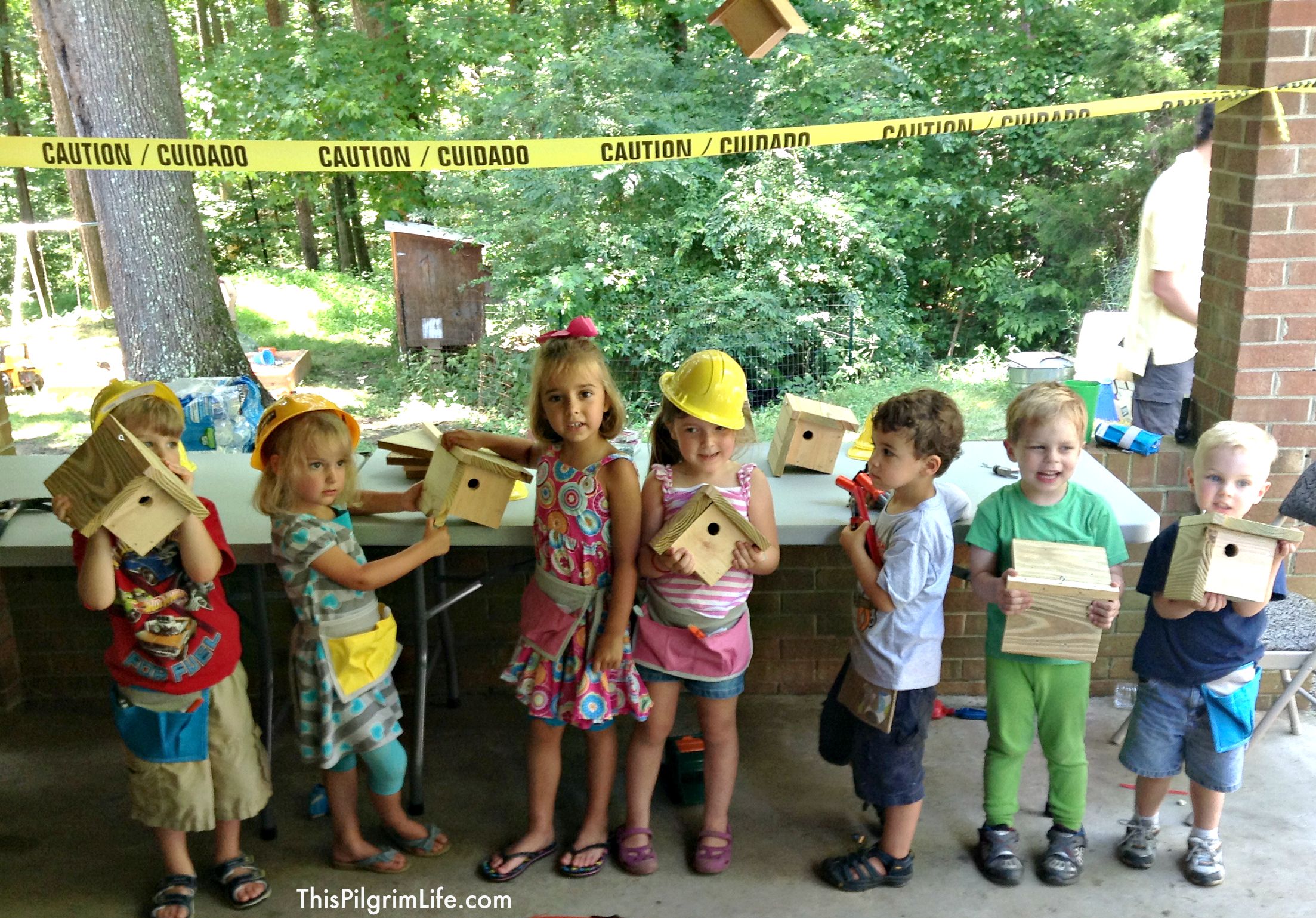 A few pieces of poster board and some carpenter’s pencils became an area for kids to draw out plans for building projects. 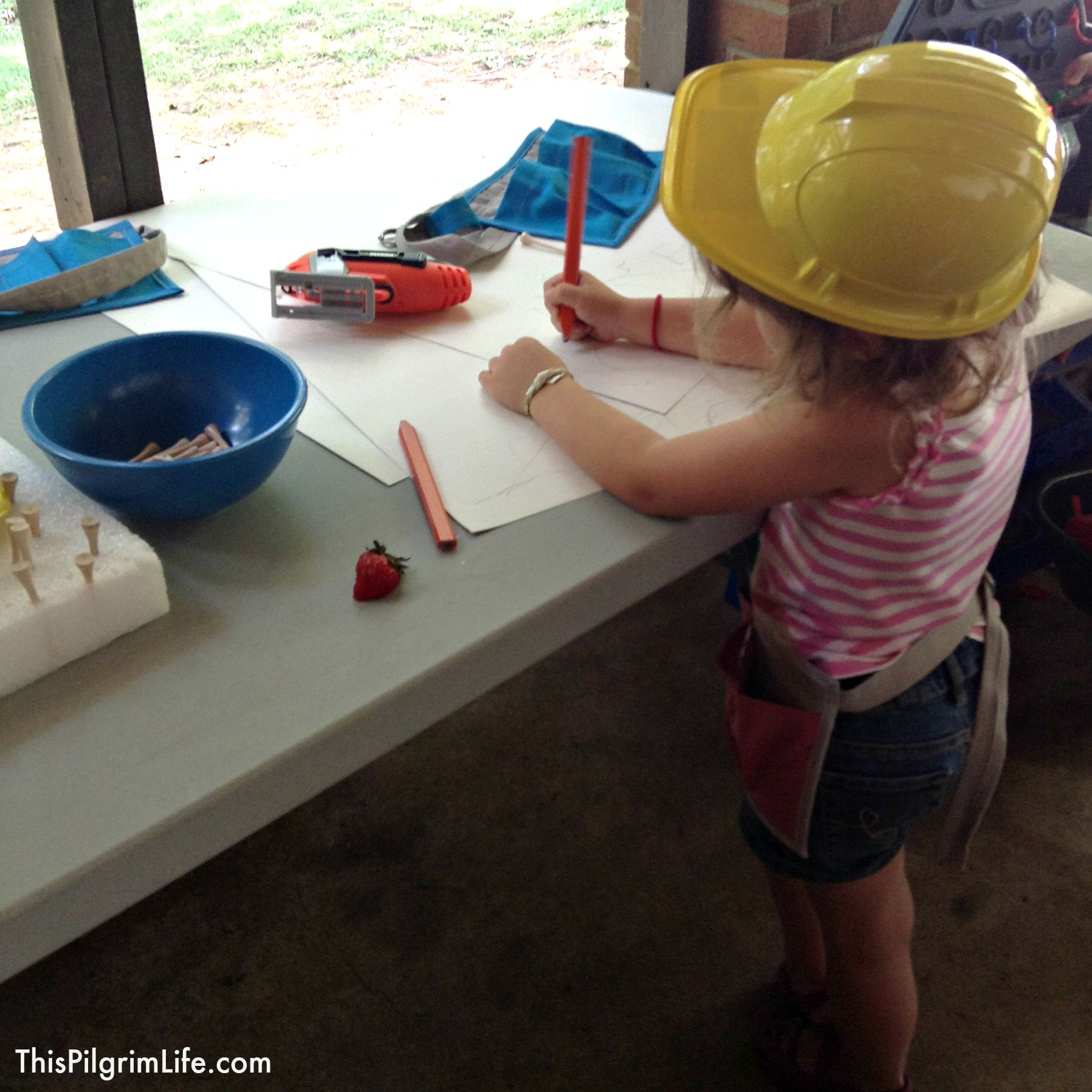 I purchased a large piece of styrofoam from the craft store with a 40% off coupon and then added some basic golf tees. Kids could come and use the plastic hammers to hammer the tees into the styrofoam.

This also turned out to be a great post-party activity for my boys the next day when I was cleaning up. 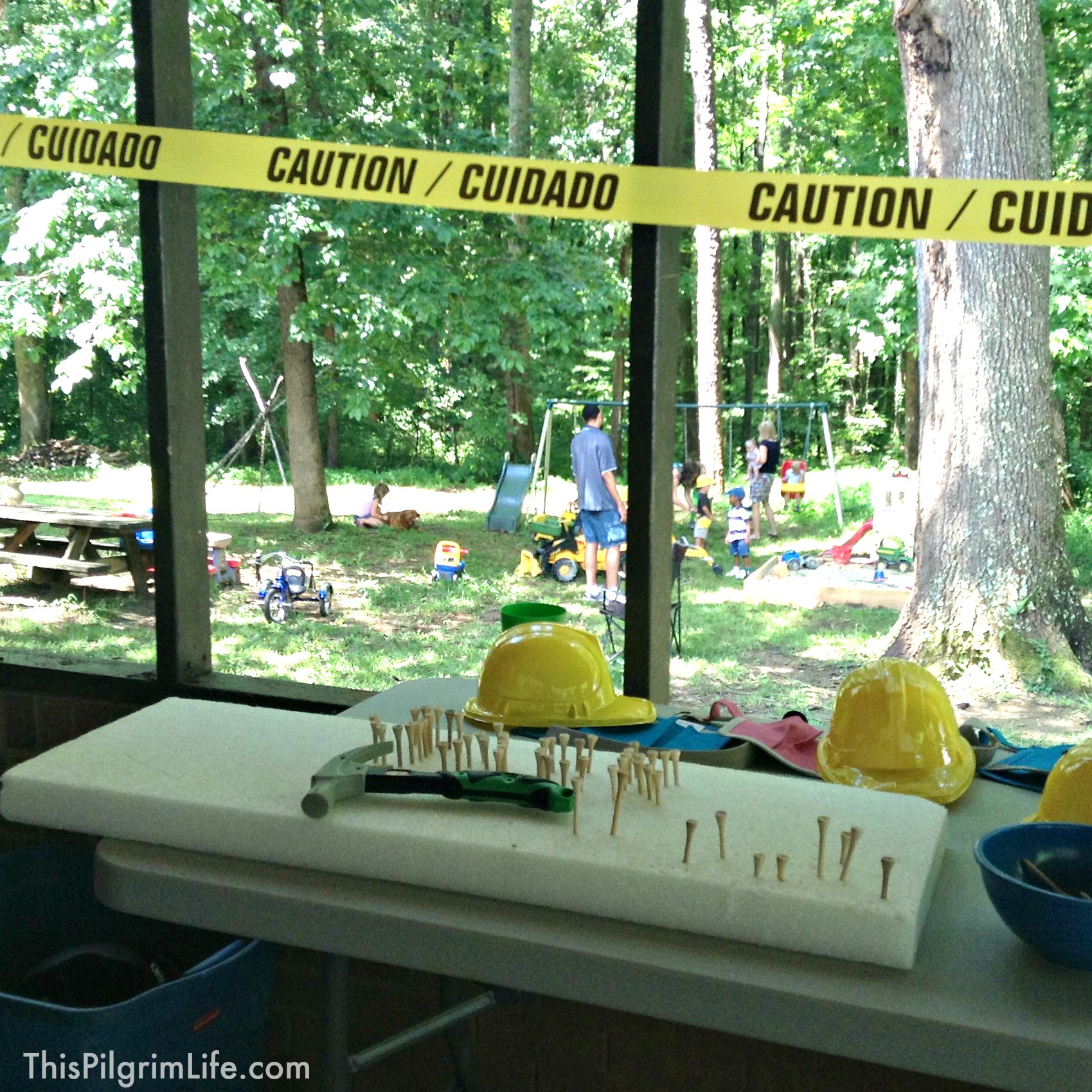 And, because I don’t want to be the cruise director the entire time at my kids’ parties, I make sure to leave plenty of time for everyone just to run around the backyard and have fun.

The kids stay busy and the parents get to talk. A birthday treat for all. 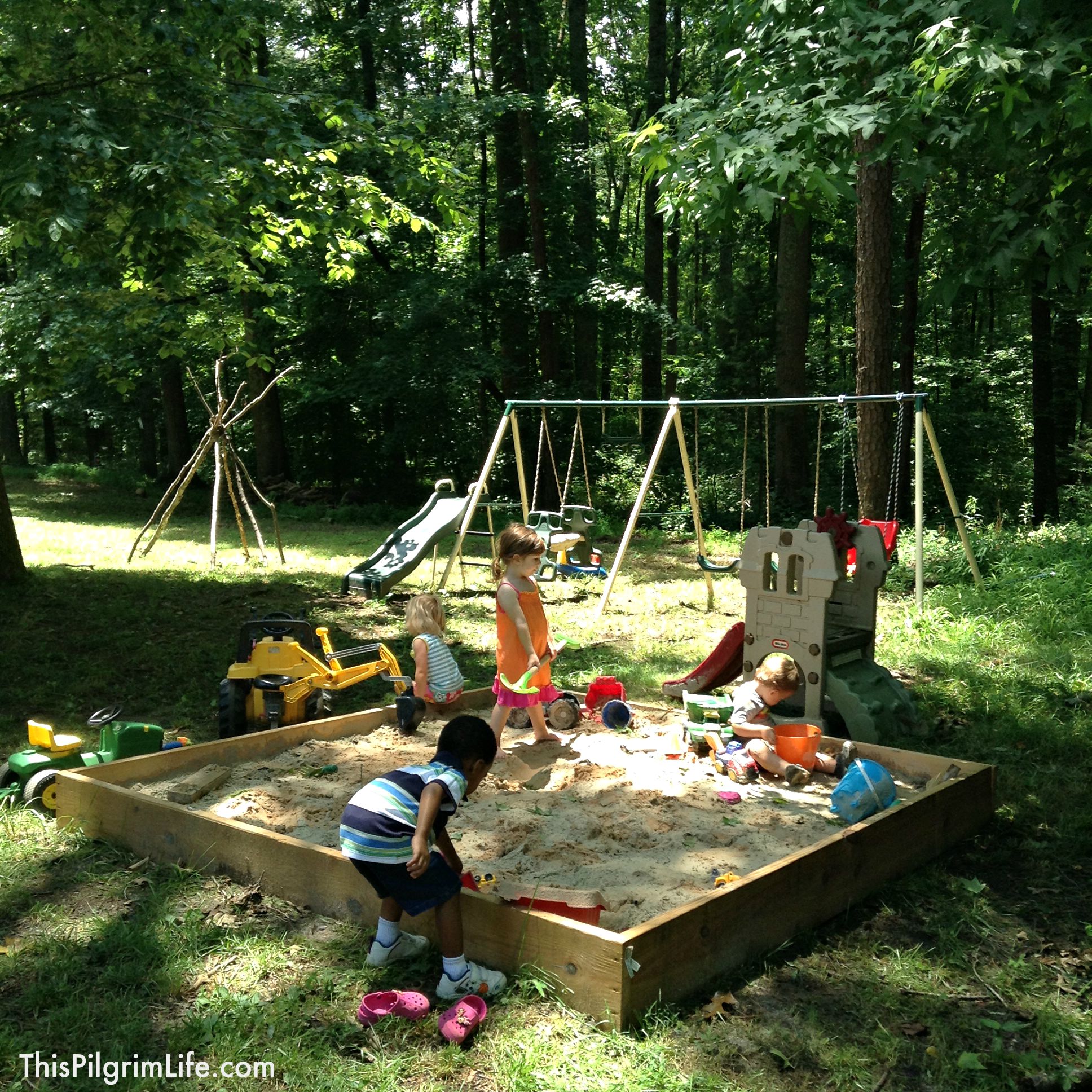 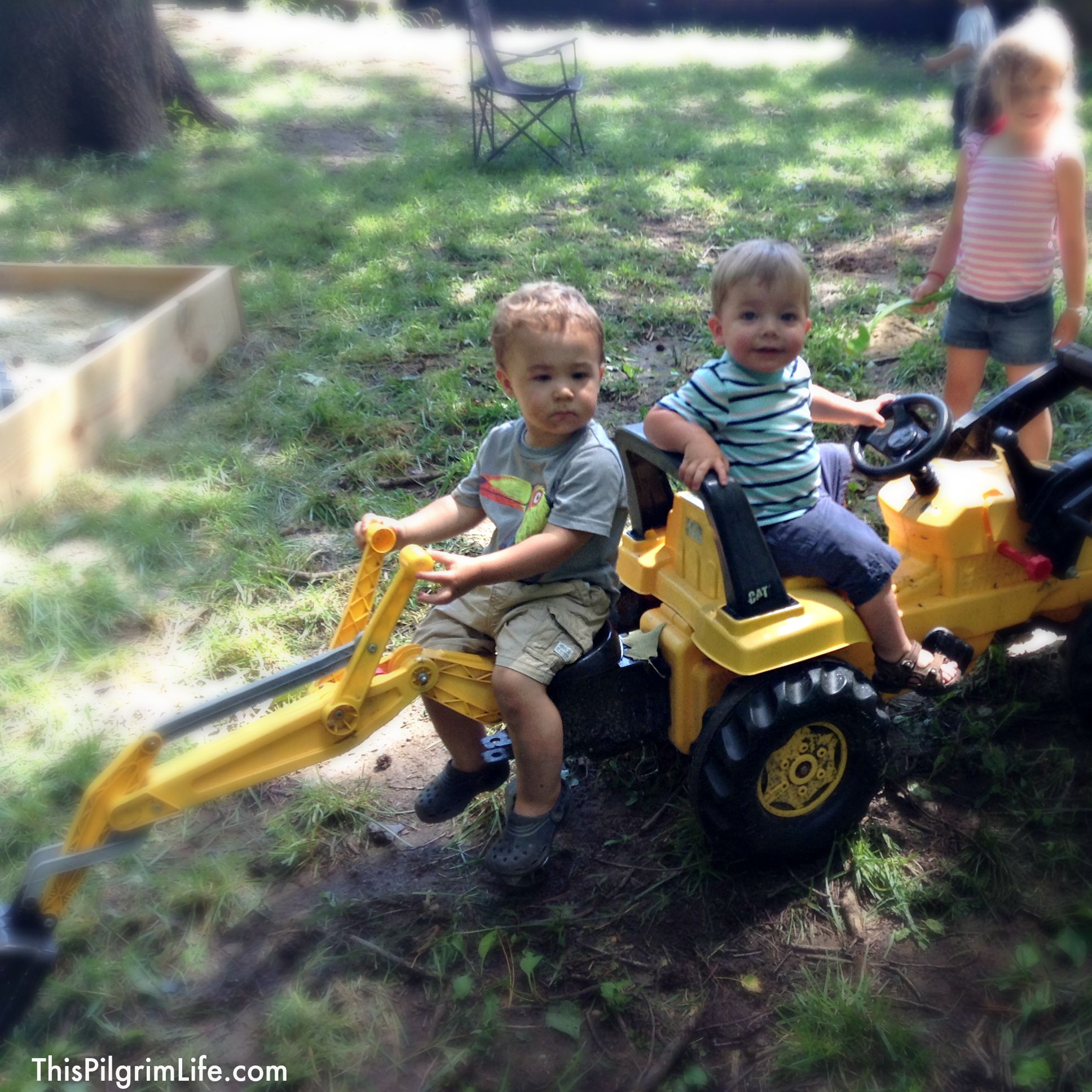 I planned a simple meal for lunch– one that wouldn’t be too expensive and one that would be easily adaptable for everyone’s needs.

You don’t eat meat? No problem. Your kid only eats bread and cheese? Got it covered. You’re a fruitarian? Here’s a kabob!

Lunch was an easy burrito bar set up in the carport along a long folding table. I don’t have any pictures (oops!), but just imagine stacks of tortillas, crockpots of black beans, and bowls of salsa, cheese, and lettuce. There were also fresh fruit kabobs, which looked so pretty it’s a shame I didn’t get a picture.

On the day before the party, I made the salsa from scratch using half fresh tomatoes and half canned to make a really big batch. The beans were simple to cook in the crockpot, and I saved money on the rest by buying it at Costco.

Also, because I was pregnant and running out of steam, I went with a ready-made cake from Costco. I wish I knew then my new favorite trick for the easiest not-really-homemade cake back then! Then I could still have escaped baking a cake but given Jack something more personalized.

This picture just cracks me up because little kids have no concept of personal space when it comes time to open presents. This hasn’t changed in the past two years either. I guess if you aren’t the one getting the presents, at least you can get as close to the birthday kid to bask in the new-toy-glow. 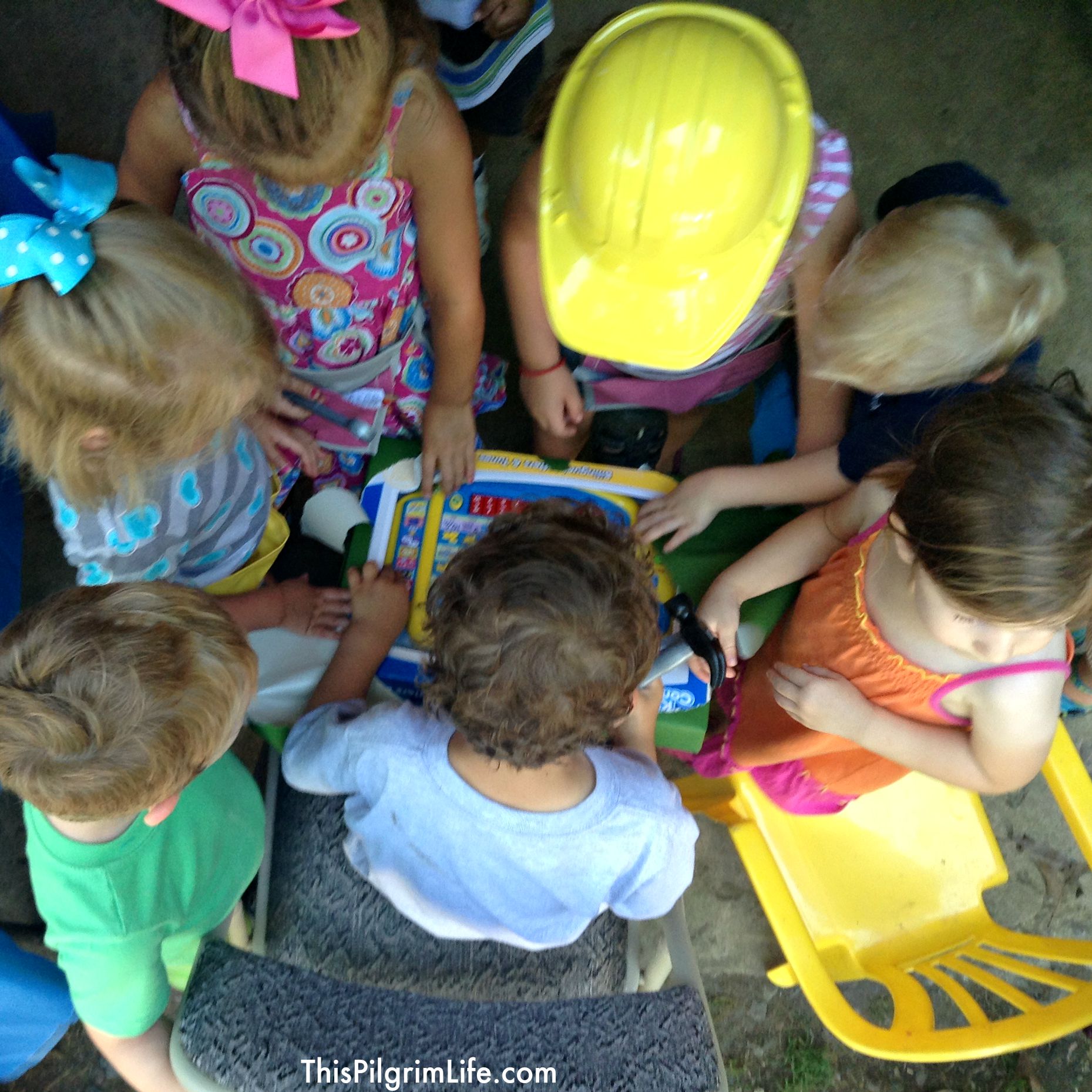 What is a favorite way you have celebrated a birthday?

Check out these other birthday party ideas: 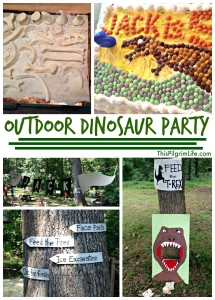 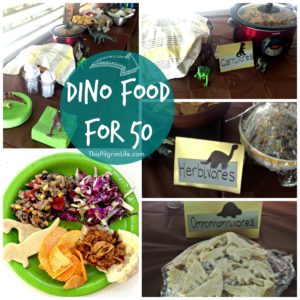 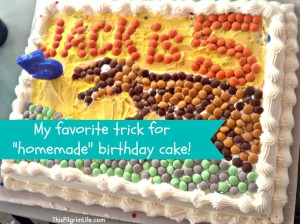