You are here: Home / Homelife / Costco and Aldi…Which Popular Store Has the Best Prices?

Over the weekend I logged a few miles walking the aisles of two different Aldi stores and the local Costco warehouse, recording prices of seventy-five common items to purchase.

This exercise in frugality was not premeditated. When I arrived at a nearby Aldi last Friday, my plan was to simply buy a few items I needed for hosting a dinner that evening. On a whim, I decided to write down the prices of everything I usually purchase at Costco on the back of the only piece of paper I had in my purse (a printout from last week’s OB appointment).

Lately it has seemed that I see a new post daily about how to save money at Aldi, followed by dozens of comments from people who also love these humble little stores. 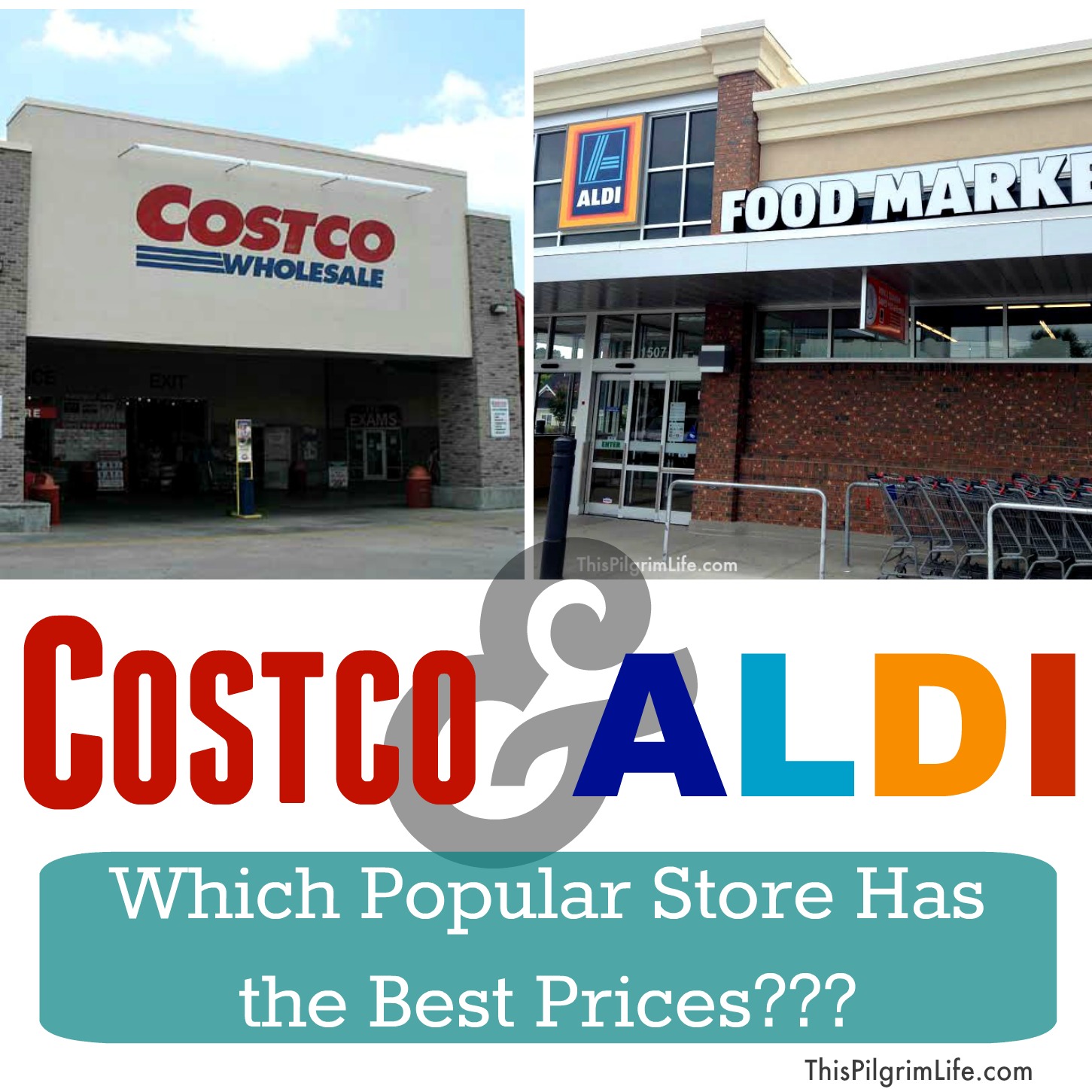 I have to admit, I have never been a loyal Aldi shopper, but I genuinely wanted to know– could I really be saving a significant amount of money by switching the majority of my shopping to Aldi?

Up until now, most of my grocery budget is spent at Costco. I love Costco and I’ve gone so far as to write about why you should love it too.

But how does a mega-store like Costco, offering predominantly items in bulk, compare to a small-scale store like Aldi, which saves customers money by cutting costs on grocery carts and shopping bags and stocking less-recognizable brands?

The results may surprise you. 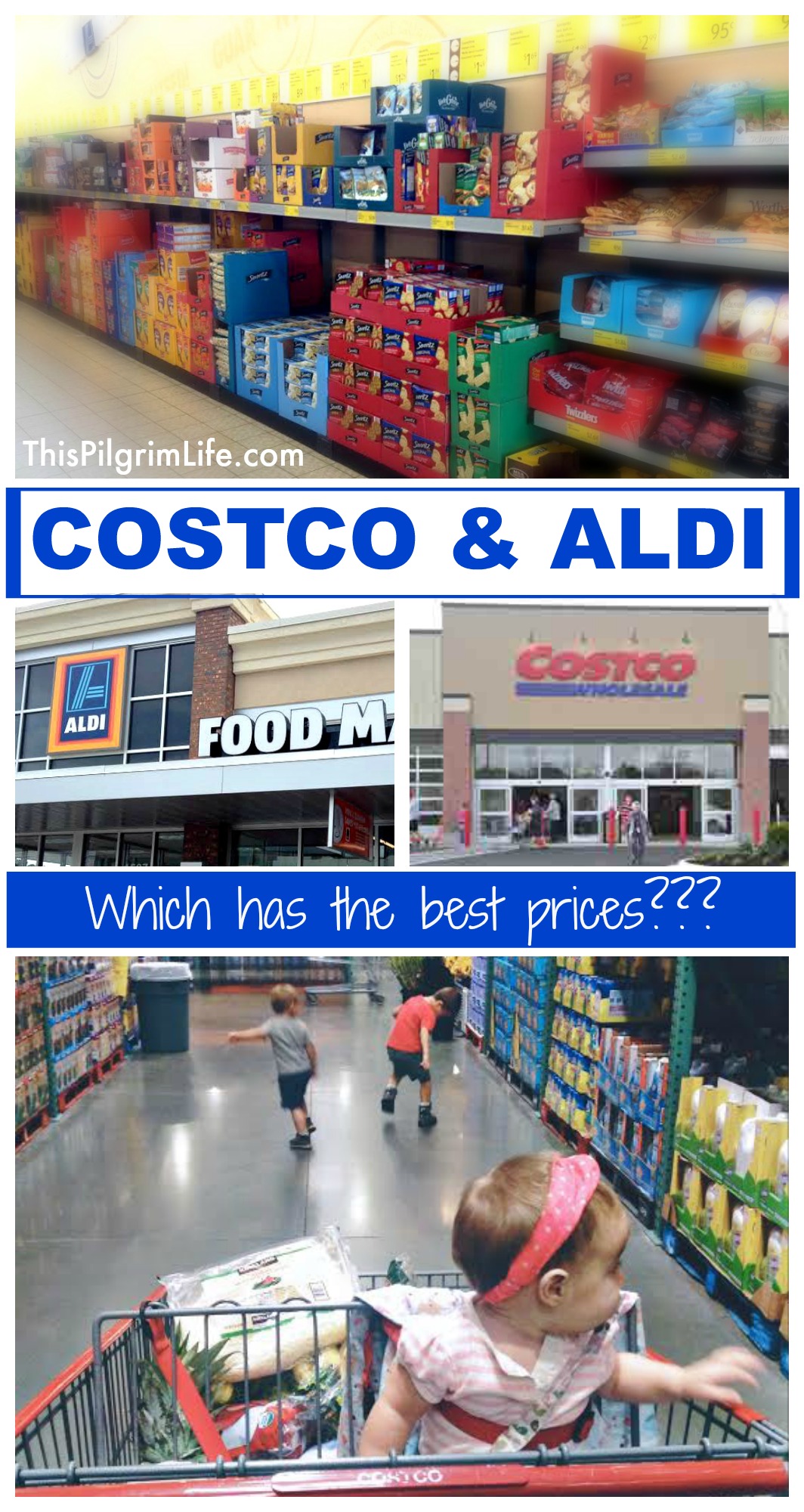 Before we dive into all the number crunching and data analysis (don’t worry, I’ve done all the heavy lifting), a few things first.

This whole process started as a personal endeavor to set my mind at ease that I wasn’t wasting gobs of our family’s money by not shopping at Aldi. I know soooo many people who love Aldi, it’s just never been my thing.

I share all this here simply because it was a mess of a lot of work and I want to spare you the effort. Haha.

I hope the lists and numbers and price comparisons help you to budget and save your family money. Whether or not you make any change, I’m gifting you a price list of seventy-five common grocery items that you can use to plan and do your own future comparisons.

Now for the results!

And the winner is…

Ok. I’m really just putting off telling you that even though there is a winner, it’s definitely not by a landslide. You guys, both stores’ prices were soooo close!

But, this isn’t youth sports where everyone gets a trophy. One store did come out ahead.

Out of 75 items, Costco has the better price on 34 items and has the same price as Aldi on 13 items. Moreover, for 5 items that Aldi has a better price for, Costco has an organic option for less than five cents an ounce more.

Moms of young children, don’t bother with the calculator. This means that Costco is cheaper or just as cheap as Aldi for 69% of many of your most common grocery purchases.

Want it broken down a little more? 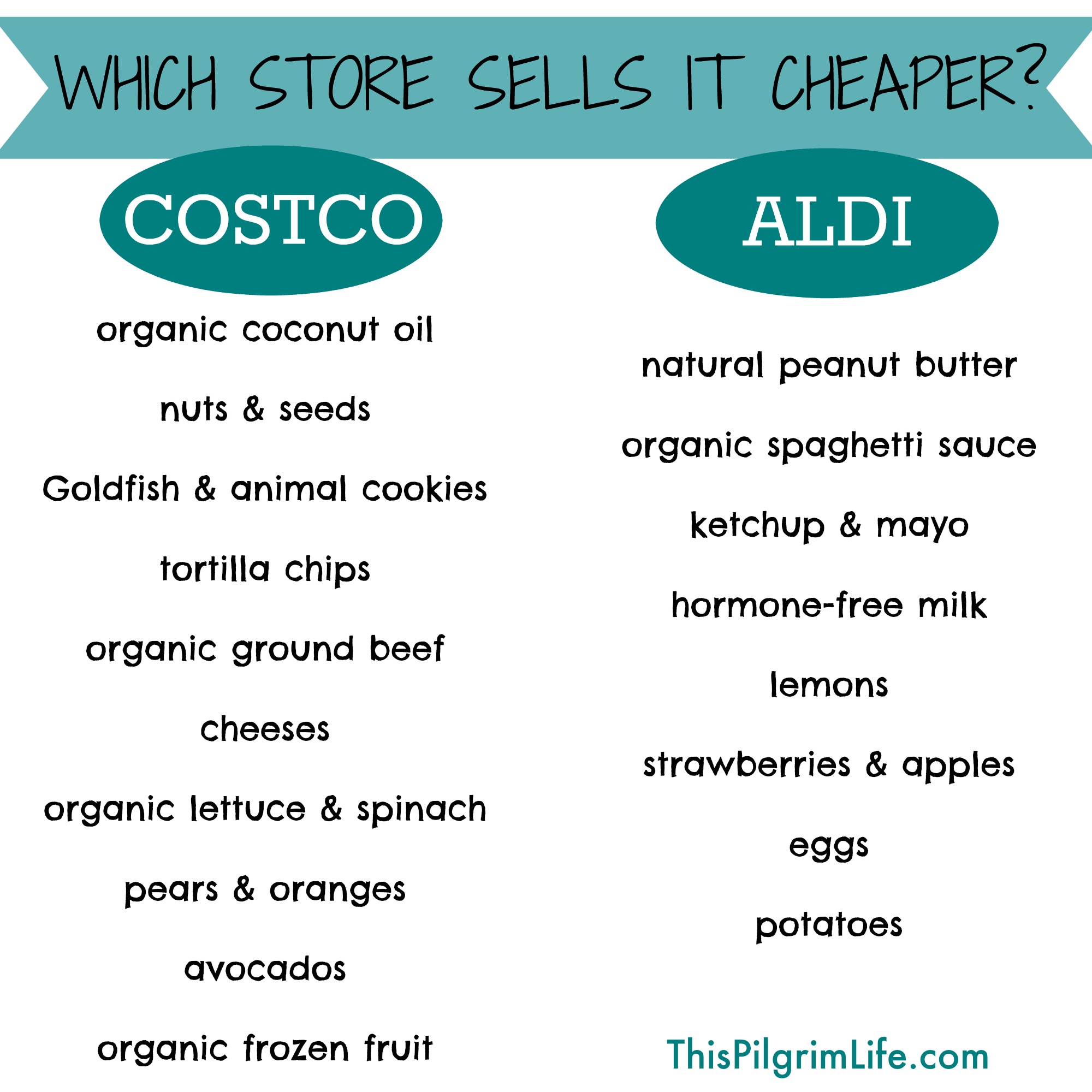 My grocery list** was broken up into 4 sections: pantry items, refrigerated items, produce (fresh & frozen), and household items. Here are the totals for each section:

You can also download a PDF copy of the price comparison spreadsheet between the two stores: Costco vs Aldi. All 75 items are listed, as well as the price differences for each.

If you look at the price comparison for each item, you will notice that for most items there is just a ten cent or less (per ounce) difference. Many differences are not very significant.

Other items do have significant price differences.

I especially think that it is worth noting that on many options, Aldi has a conventional option for just slightly less than Costco’s organic option. (See maple syrup, chia seeds, carrots, and so on).

**When possible, I tried to compare conventional to conventional, and organic to organic. I visited multiple Aldi’s to check for a variety of items and to check on the consistency of prices (they were the same). The list is not exhaustive, of course, but should offer a great starting point for comparing the two store.

But is Costco and Aldi comparing apples and oranges?

There are more points to note about each store in addition to the basic fact of which store sells the cheapest Cheerios. The stores themselves are quite different.

The bottom line is whether you pick Costco or Aldi, you’ll be paying similar amounts for most items. However, Costco has more organic options for the same price or slightly more than many of Aldi’s choices.

Are you surprised by the results of the comparison?

Which is your favorite store to shop?