You are here: Home / Momlife / Food for a Crowd & My New Favorite Way to Buy My Cake and Decorate It Too

So this weekend we had fifty people over to our house for a party. The party took place in our carport and backyard, and to say I’m thankful it didn’t rain is an understatement.

Since the storm was good enough to wait until that evening, the afternoon was full of around thirty children running around our yard digging up fossils in the sandbox, excavating dinosaur skulls from blocks of ice, feeding the T-rex, and checking out our new mud kitchen.

Amazingly enough, all of this kept the children occupied so thoroughly that the adults were actually able to converse! A true parenting miracle. 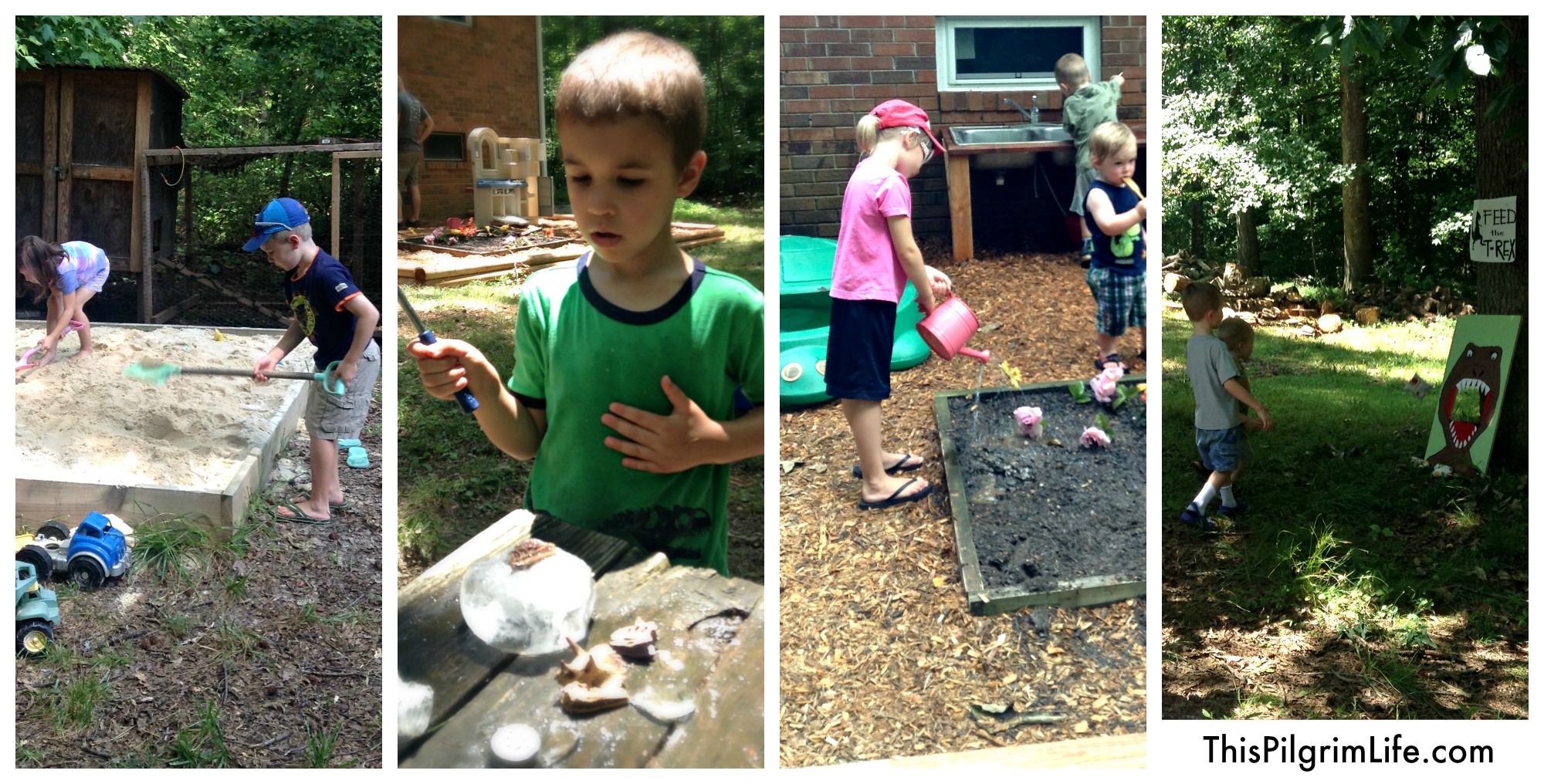 (Read more about the details from our outdoor dinosaur party and see lots of pictures here).

We scheduled the party during lunchtime and planned for a simple, kid-friendly lunch buffet. Dishes that were healthy but low in cost were a priority, especially as RSVP’s began coming in and we (happily) saw how many people would be able to attend.

Anytime we have people over, whether it is to share a weeknight meal or for a big party like this, I like to have everything prepared and ready before our guests arrive. I’ve found it’s so much easier to be hospitable and cheerful (read: not stressed out) when I’m not still attending to cooking duties or food prep.

The night before the party, the food was ready and waiting in the refrigerator, with the exception of two quick dishes for which our fridge lacked space.

Curious what we chose for feeding fifty of our favorite people? Read on to get the full menu, including an incredibly easy way to make delicious bbq, and see why I don’t plan on baking my kids’ cakes for big parties anymore.

Food For A Crowd: Dino Food for 50 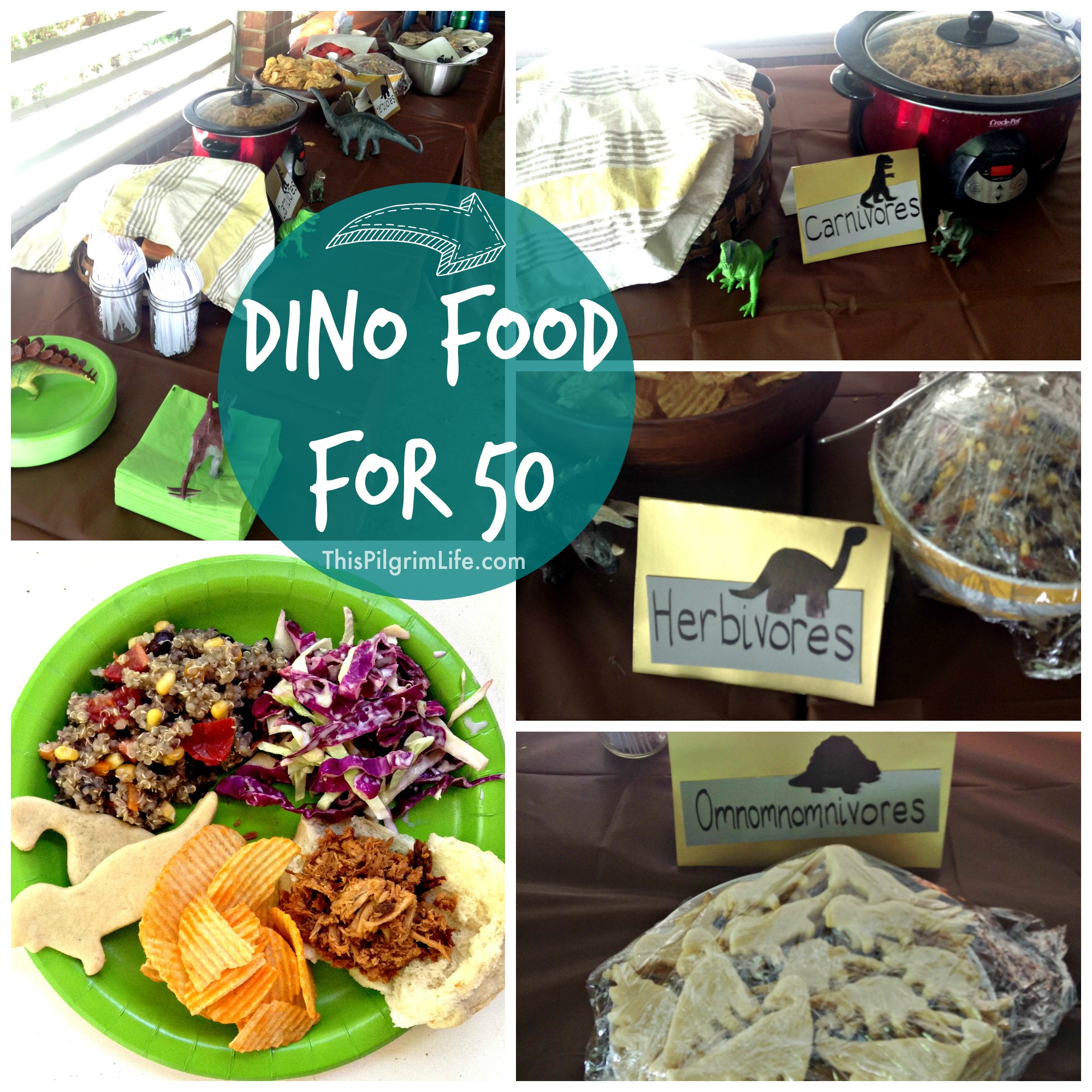 Planning the food and talking about the labels had my now-five-year-old son and me giggling all week. He’s getting older and it’s not half bad.

Together we planned dishes for carnivores and herbivores alike, and since I knew at least a few people who are strictly herbivores, I didn’t want to skimp on party food for them. A new favorite and a cool classic side would do.

Trying to figure out an inexpensive way to provide a filling meal to so many can be a challenge, but these little bbq sandwiches were both frugal and delicious. 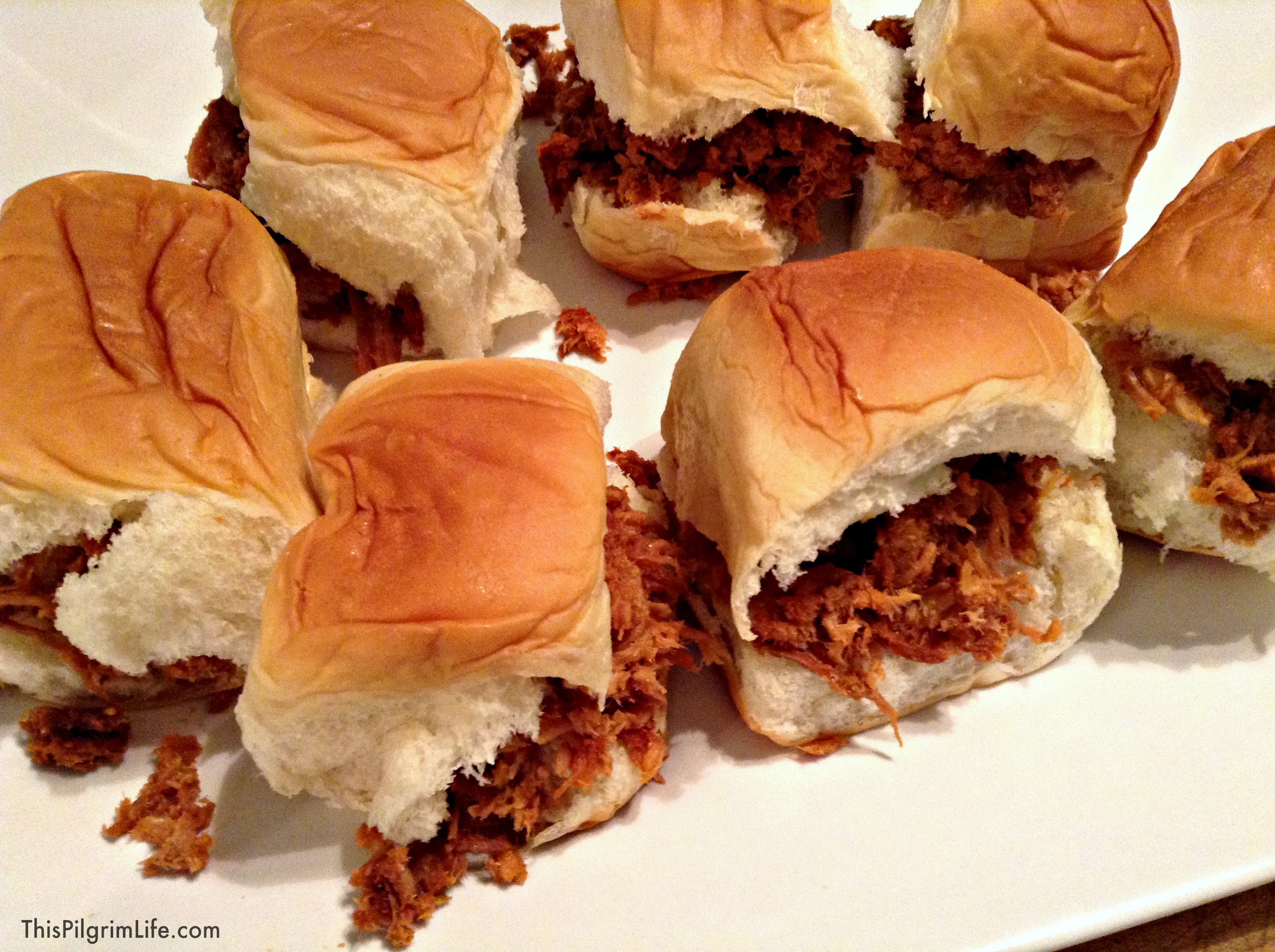 I purchased a long pork loin* from Costco and chose sweet Hawaiian rolls instead of standard size buns, which also saved a lot of money. The combination turned out to be just enough food for everyone and an easy way for kids to chow down too.

Shredded Pork Barbecue in the crockpot: Salt and pepper the pork loin. Cook on high in a crockpot** for about 3-4 hours or on low for 6-7 hours until the pork is cooked through and shreds easily with a fork. Use two forks to shred the meat. (Alternately, you can save time and shred the hot meat in a stand mixer using the paddle attachment). Pour in a liberal amount of your favorite barbecue sauce (more than enough to coat all the pork). Keep the bbq warm until ready to serve, or refrigerate and reheat when needed.

*A 10-lb pork loin made more than enough for the party and for leftovers for the next day.

**I split the pork loin into two crockpots to cook, then combined the pork once it was cooked and shredded. 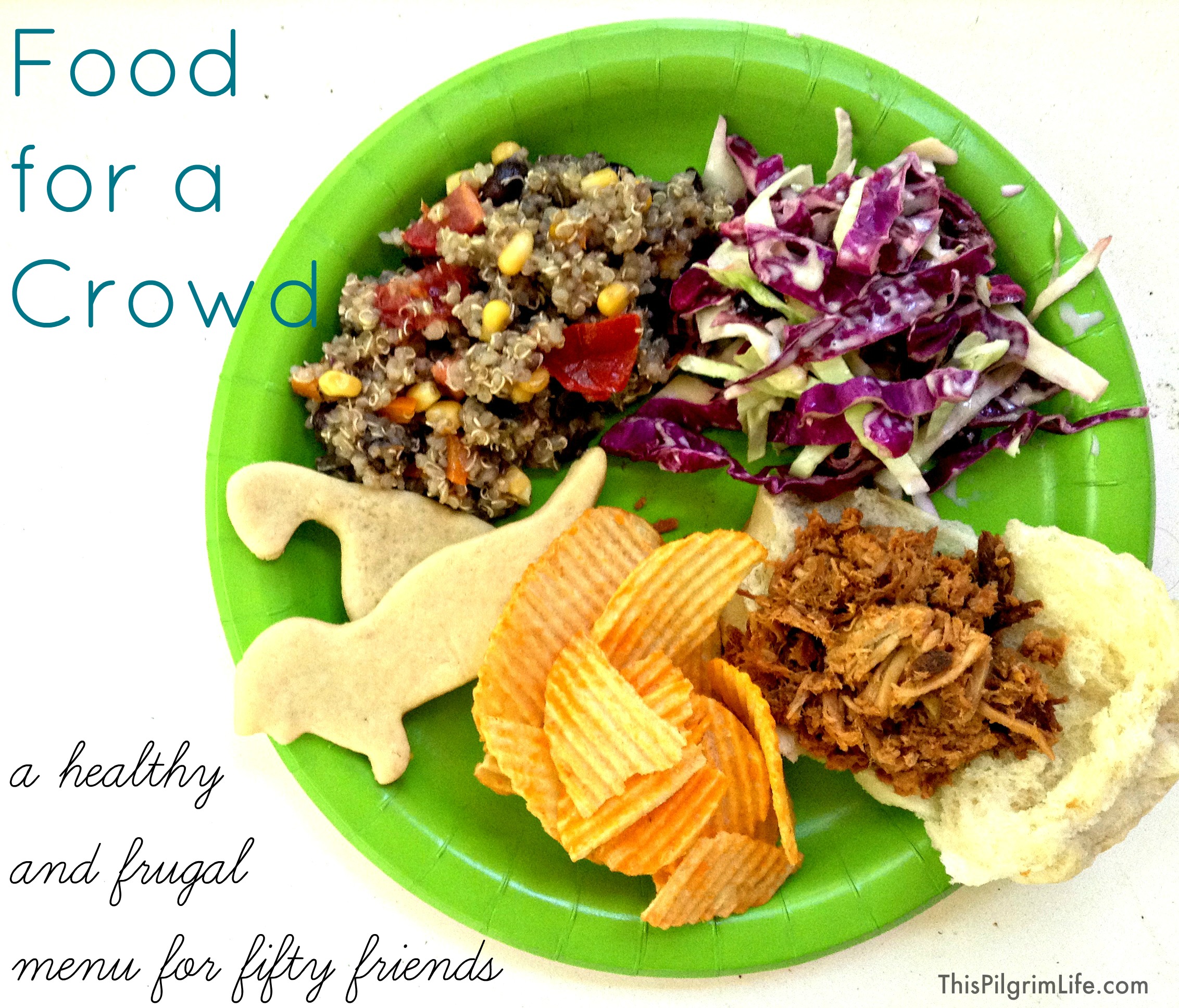 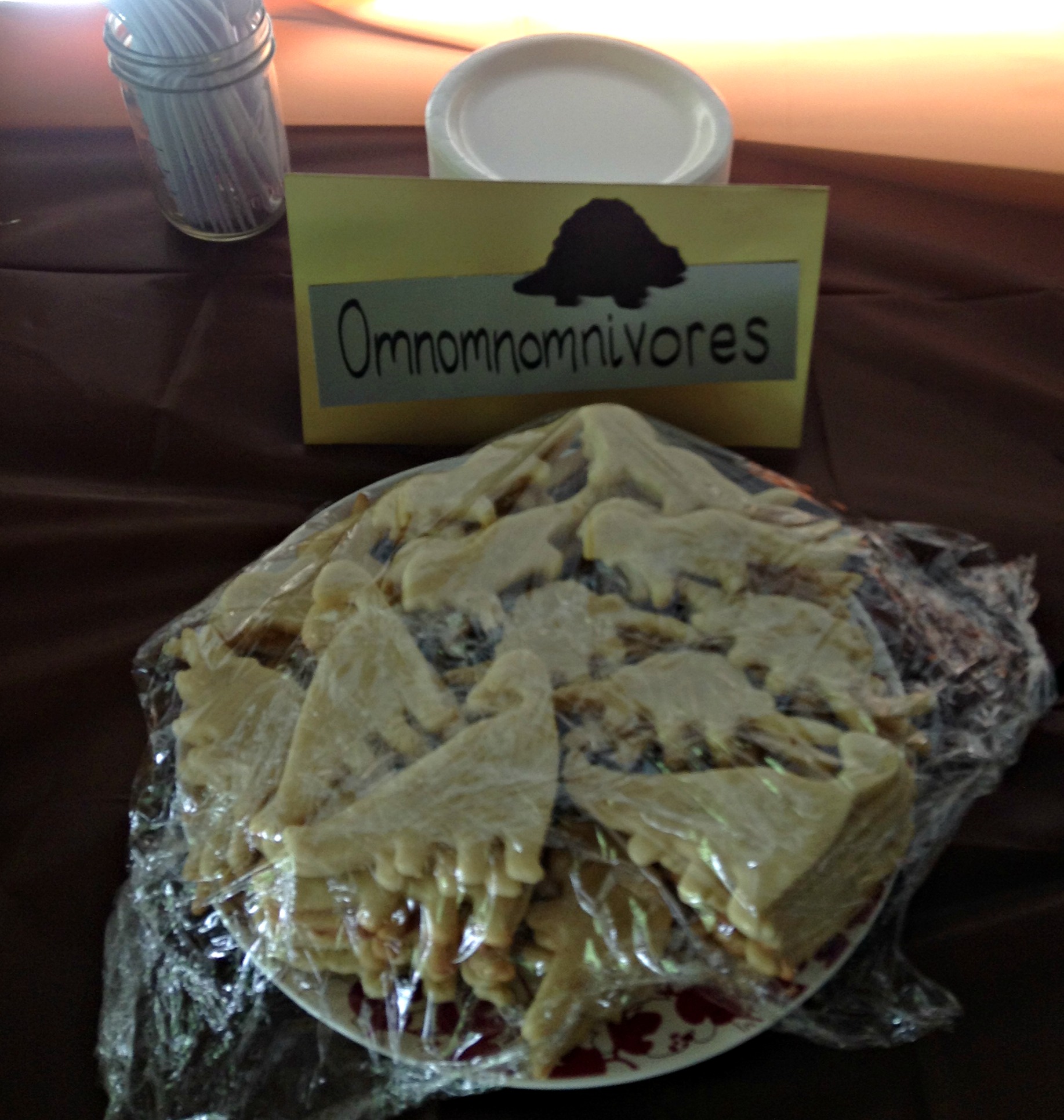 sorry for the plastic wrap! all the food was outside and was kept covered…and the photographer/mother of the birthday boy was busy!

My New Favorite Way to Buy A Cake & Decorate It Too…

The day before the party was the day that I had planned on baking the cake for the party. However, when a few appointments took longer than we anticipated, I knew that trying to go home and bake a large cake was more than I needed to try to do.

Buying a big cake was obviously the answer (and picking it up from Costco was the obvious choice), but I still wanted to be able to give my son a dinosaur cake.  It was too late to order a  personalized cake and I was still holding on to an idea of how I wanted to decorate it.

My new go-to party plan? Buy a ready-made cake, remove the top layer of icing, and decorate it however I want. No cake baking needed. Free to decorate however I like. 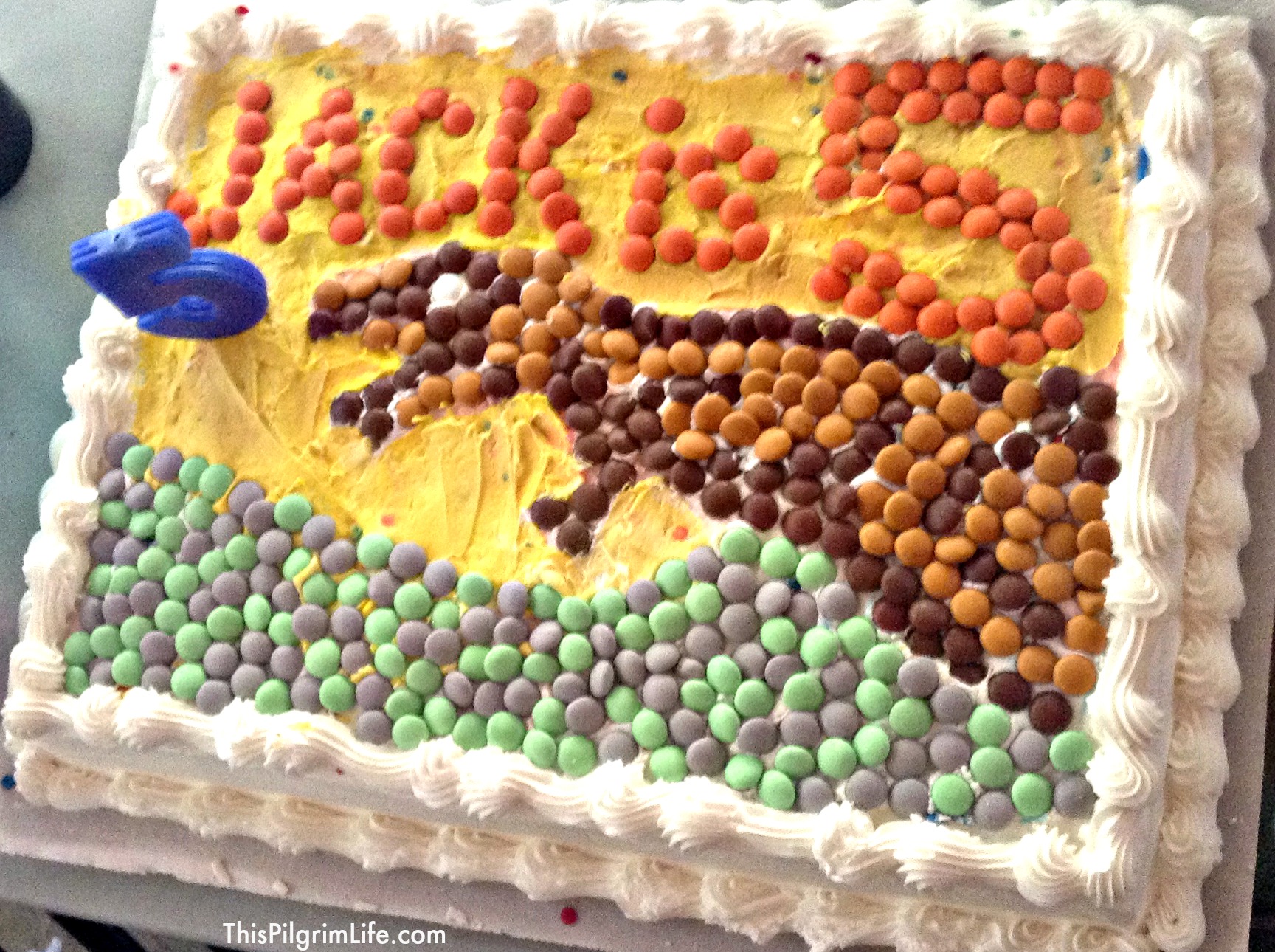 My late-night version of a T-rex m&m cake 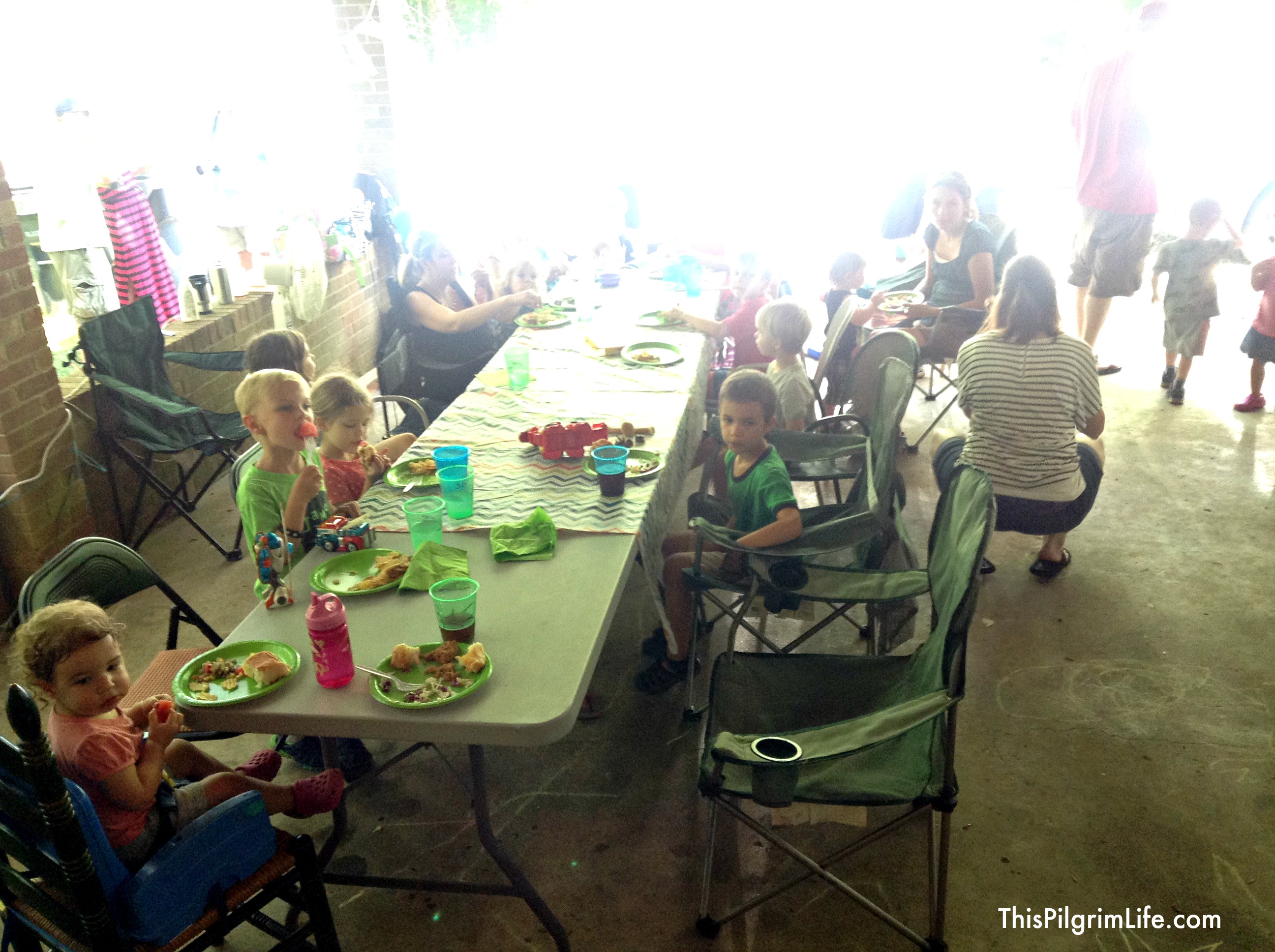 The party was a success!

What are your tips for feeding large groups of people?