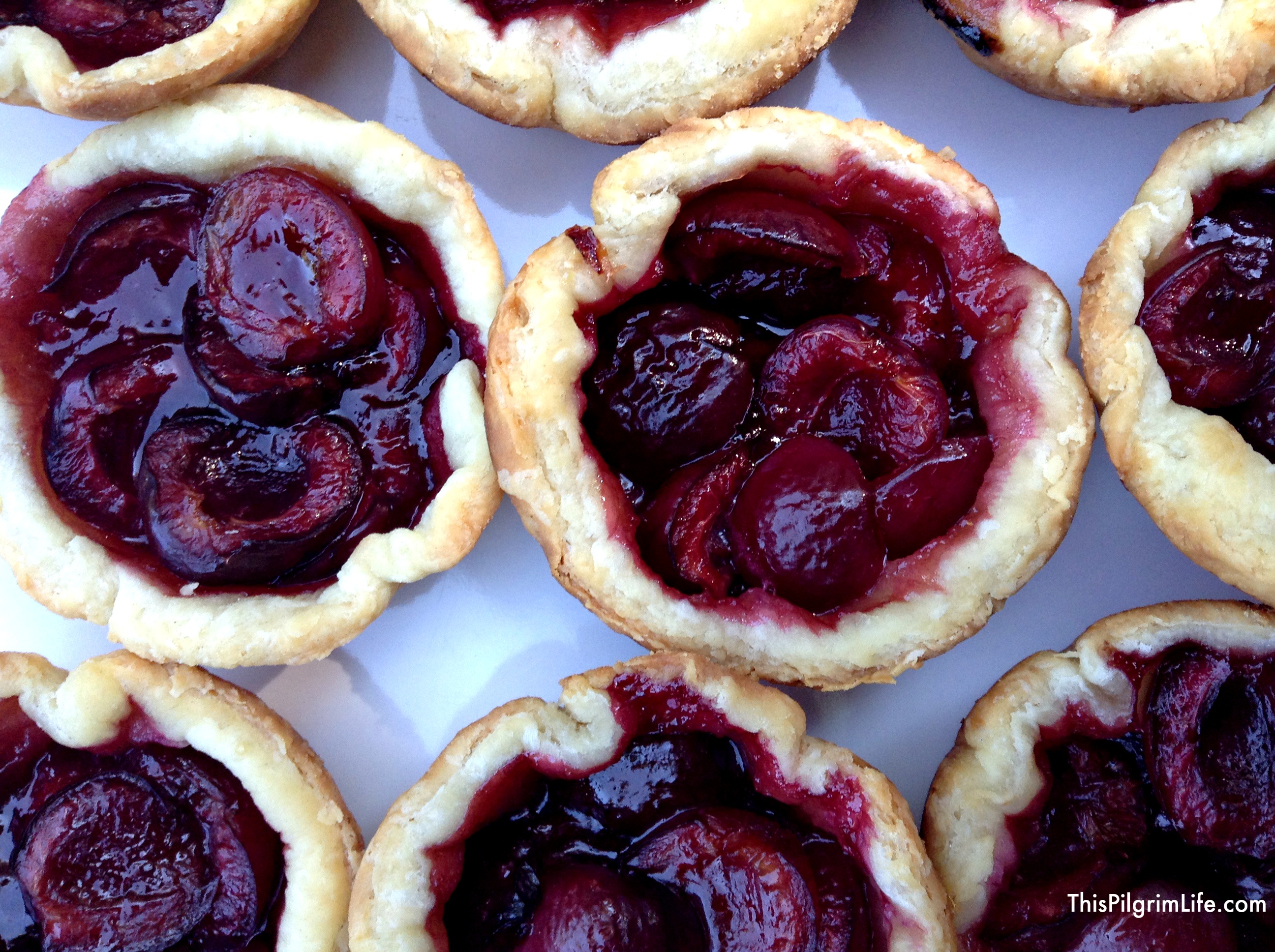 All the apple pies for my father-in-law. All the mocha pie with espresso whipped cream for dinners with friends. And all the summer pies with fresh fruit bursting with flavor just because.

My love for pie runs deep. Not only because it’s amazingly delicious. I also have a love for all things versatile. And pie is just that. With the same dough, you can bake a beautiful pie for a dinner party (don’t forget the whipped cream!),  grab some jam to make freezer pop-tarts, or whip up a batch of little pies that fit perfectly in your hand.

Tonight called for the latter. 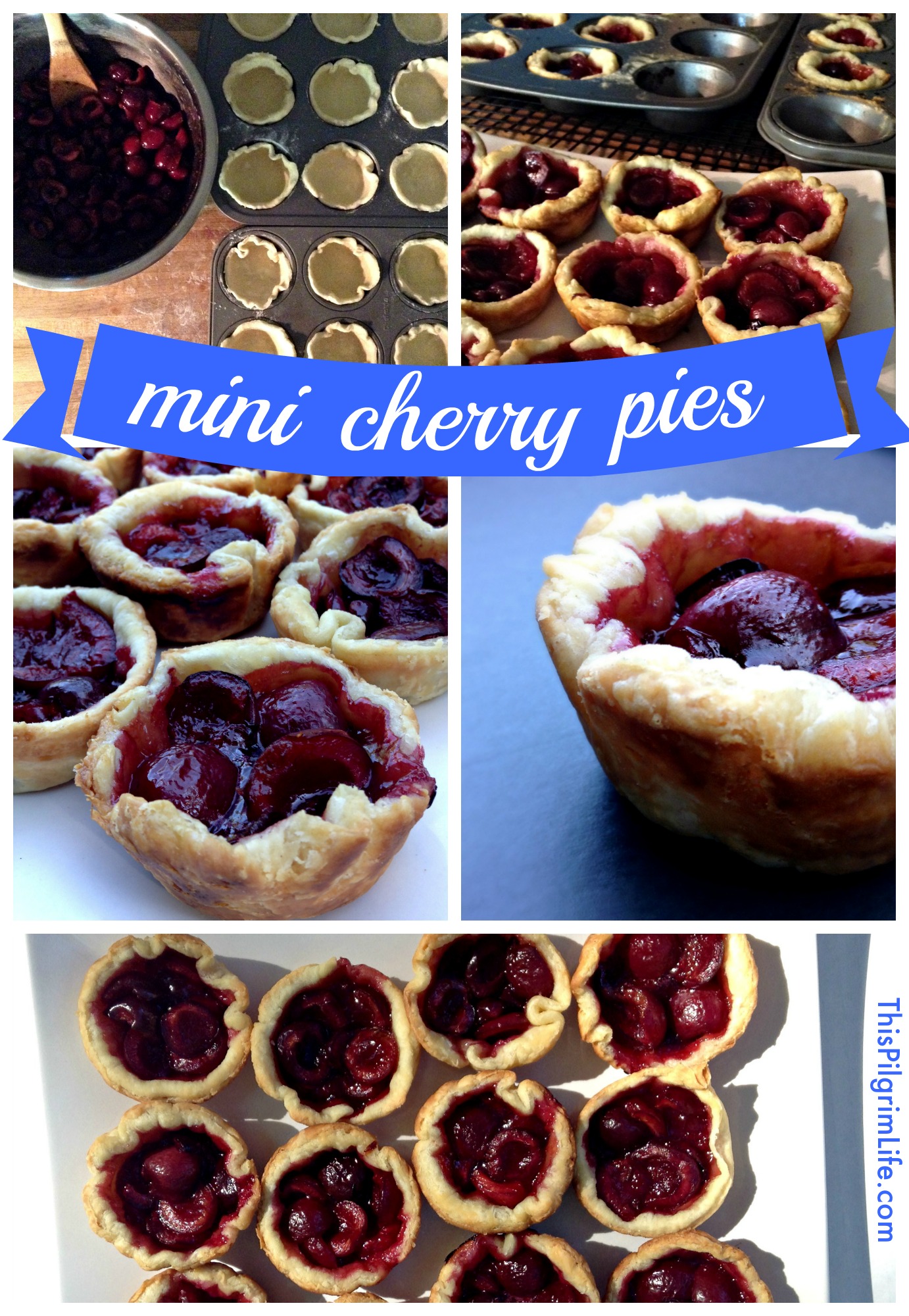 Fresh cherries in the fridge and a cookout with friends. My son was the one who had the idea to bring a cherry pie. Divine inspiration? I’m not ruling it out.

Both my boys joined me in the kitchen to help prepare the pies while their sister napped. I will admit that at first, I wanted the quiet of the kitchen island in the shadowy afternoon sun to myself. But they were so eager and cute, and ultimately I was happy I conceded.

They took turns with the cherry pitter while the other one sliced the cherries in half with a small paring knife. I sat back and took a few pictures (which are a little darker than normal because I was still loving that shadowy afternoon sun and unwilling to turn on the overhead light). 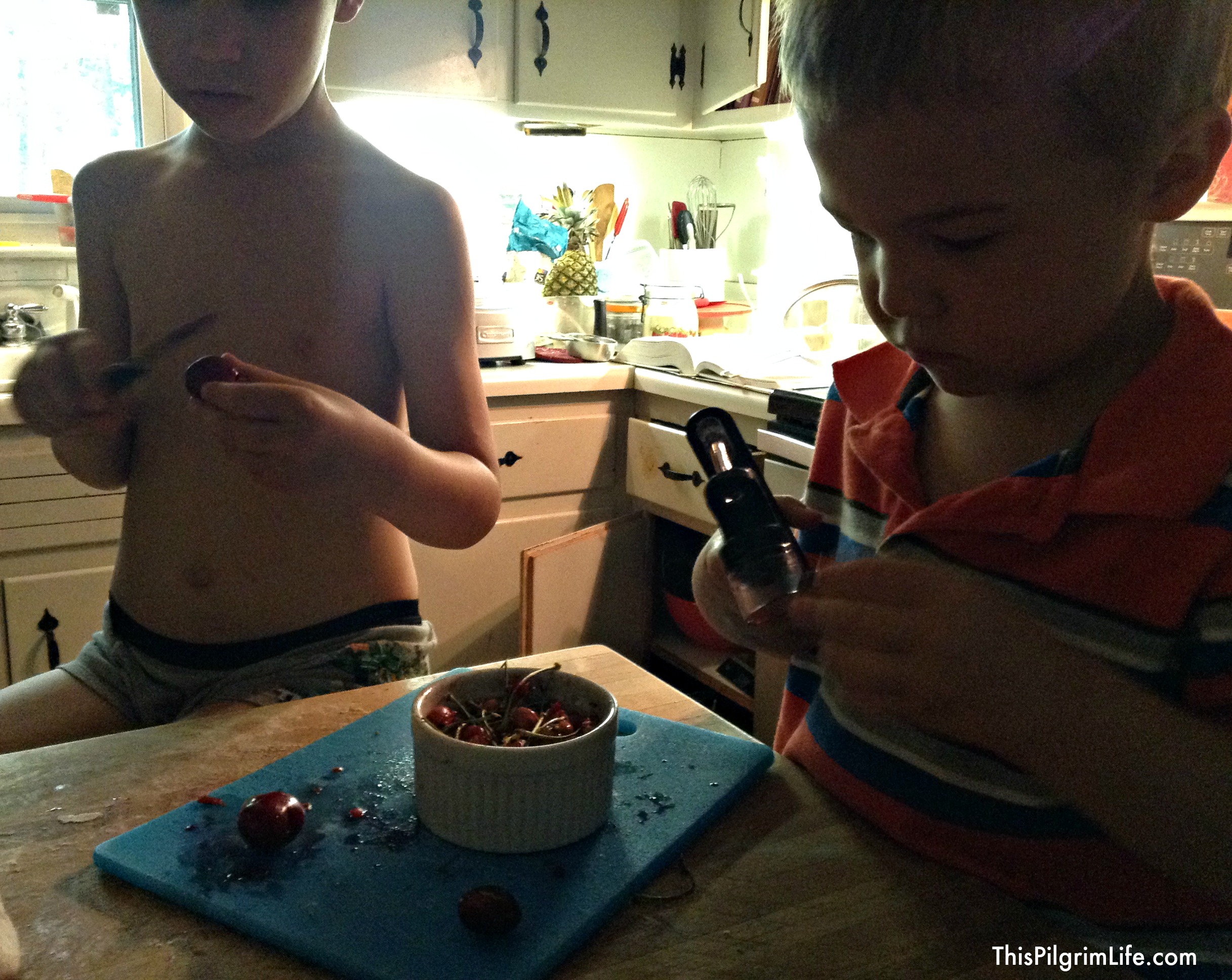 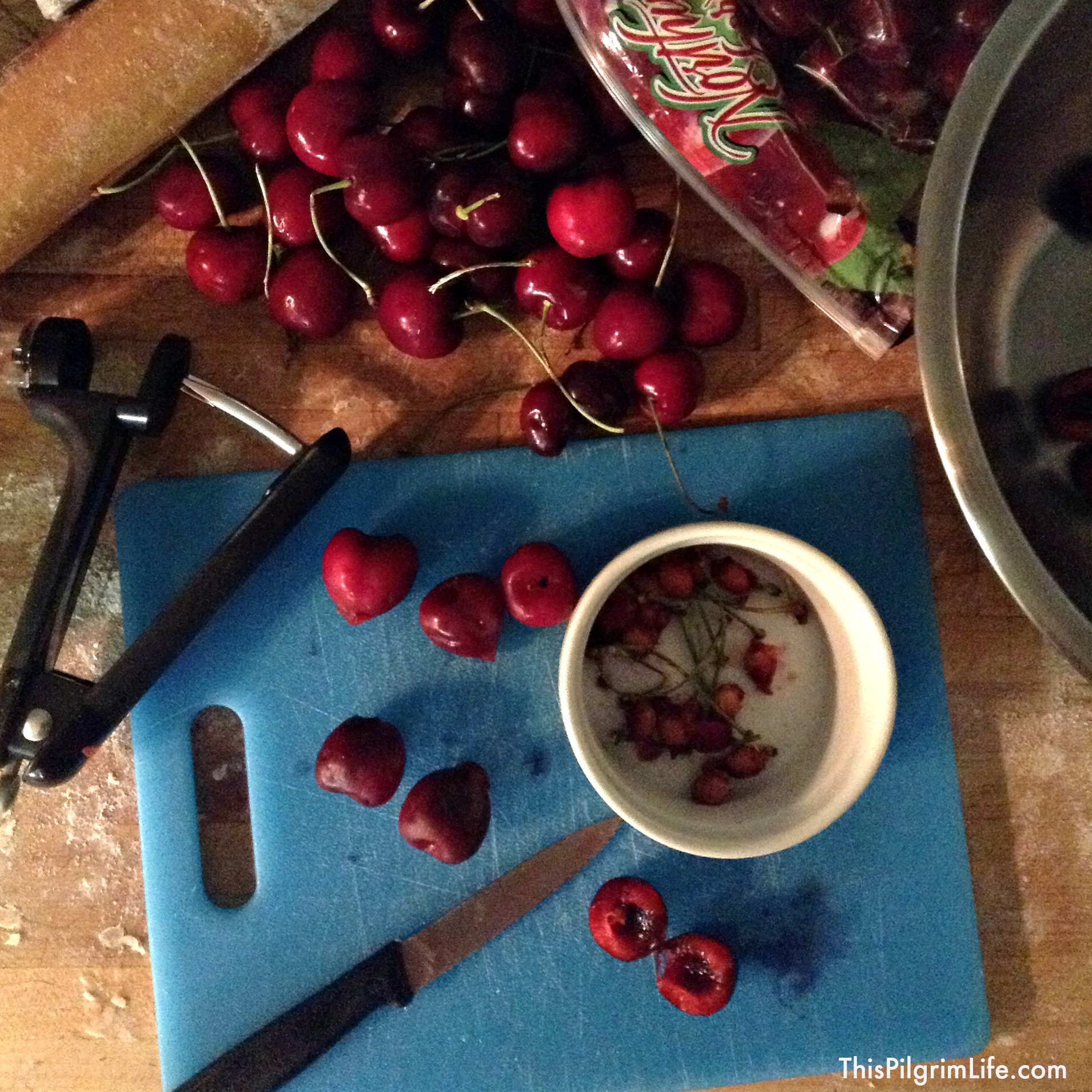 These little mini cherry pies met with rave reviews at the cookout, especially topped with a dollop of vanilla ice cream.

I may have had two. But then again, I’m eating for two now, sooooo…

Make these pies. You won’t regret it. Bring them to your Independence Day cookout or your church shindig or your next big family function. Just be sure to share them, because I don’t think having 24 mini pies in the house is good for anyone’s summer style. 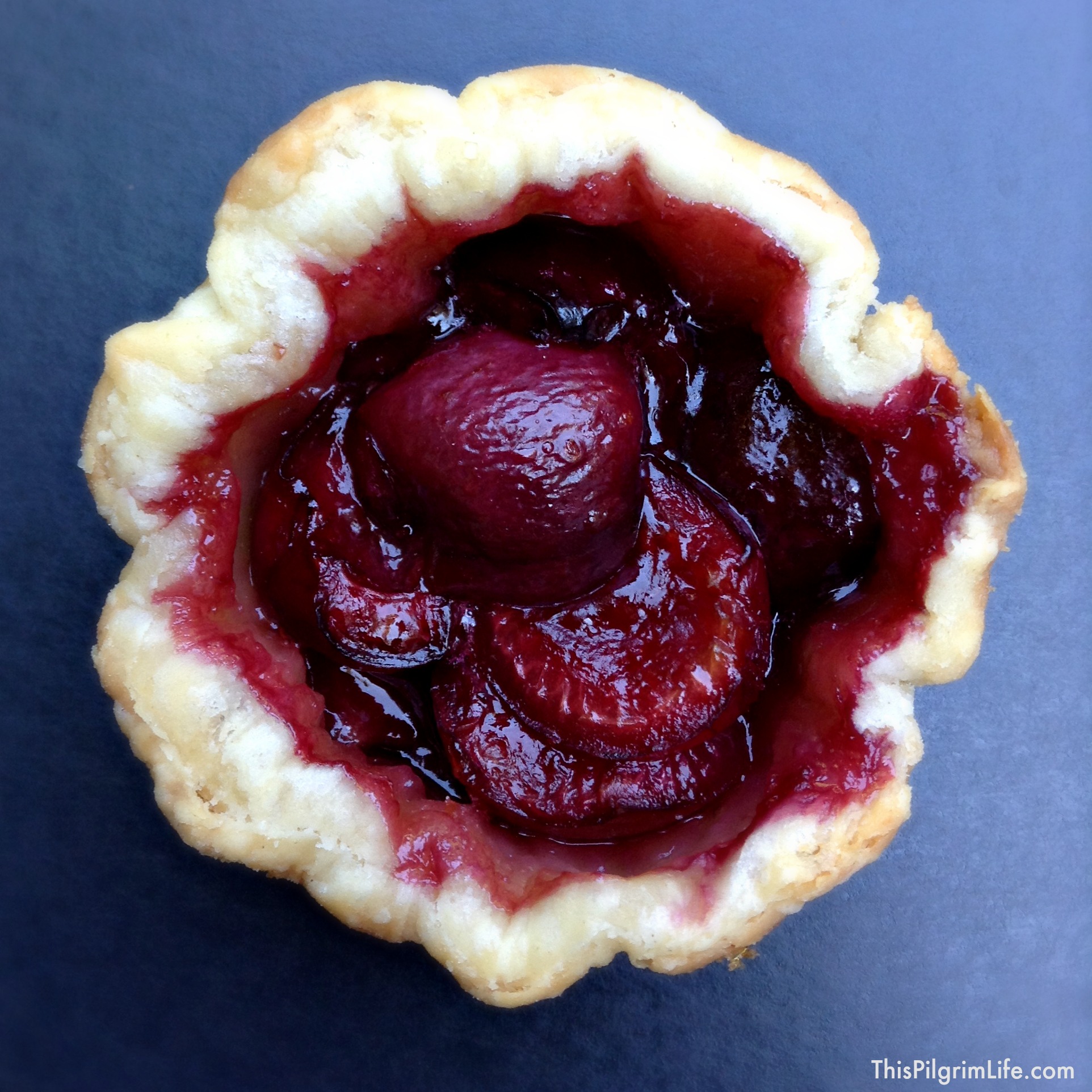 1. Make the pie dough, divide the dough in half, and wrap both pieces in plastic wrap and press into disks. Refrigerate both disks for at least one hour.

2. Remove one pie disk from the refrigerator and roll the dough out into a 1/4 inch thickness on a lightly floured surface. Cut 4-inch circles from the dough and press each into an ungreased opening in a muffin tin. Press together the scraps and roll them out again, dusting the counter with flour, cutting more circles, and repeating the process until you have used all the dough.

Remove the second disk and repeat rolling and cutting until you have filled the muffin tins. The recipe should fill two standard muffin pans.

Refrigerate both muffin pans while you assemble the cherry filling.

4. In a medium-sized bowl, stir together the halved cherries and the following four ingredients. Let stand for ten minutes to give the arrowroot time to thicken the mixture.

5. Remove the muffin tins from the refrigerator. Fill each cup with two heaping tablespoons of cherry filling. Sprinkle the tops of the pies with turbinado sugar.

6. Bake for 20 minutes in the preheated oven, rotating the pans halfway through.

7. Cool the pans on a wire rack for at least ten minutes before removing the mini pies. 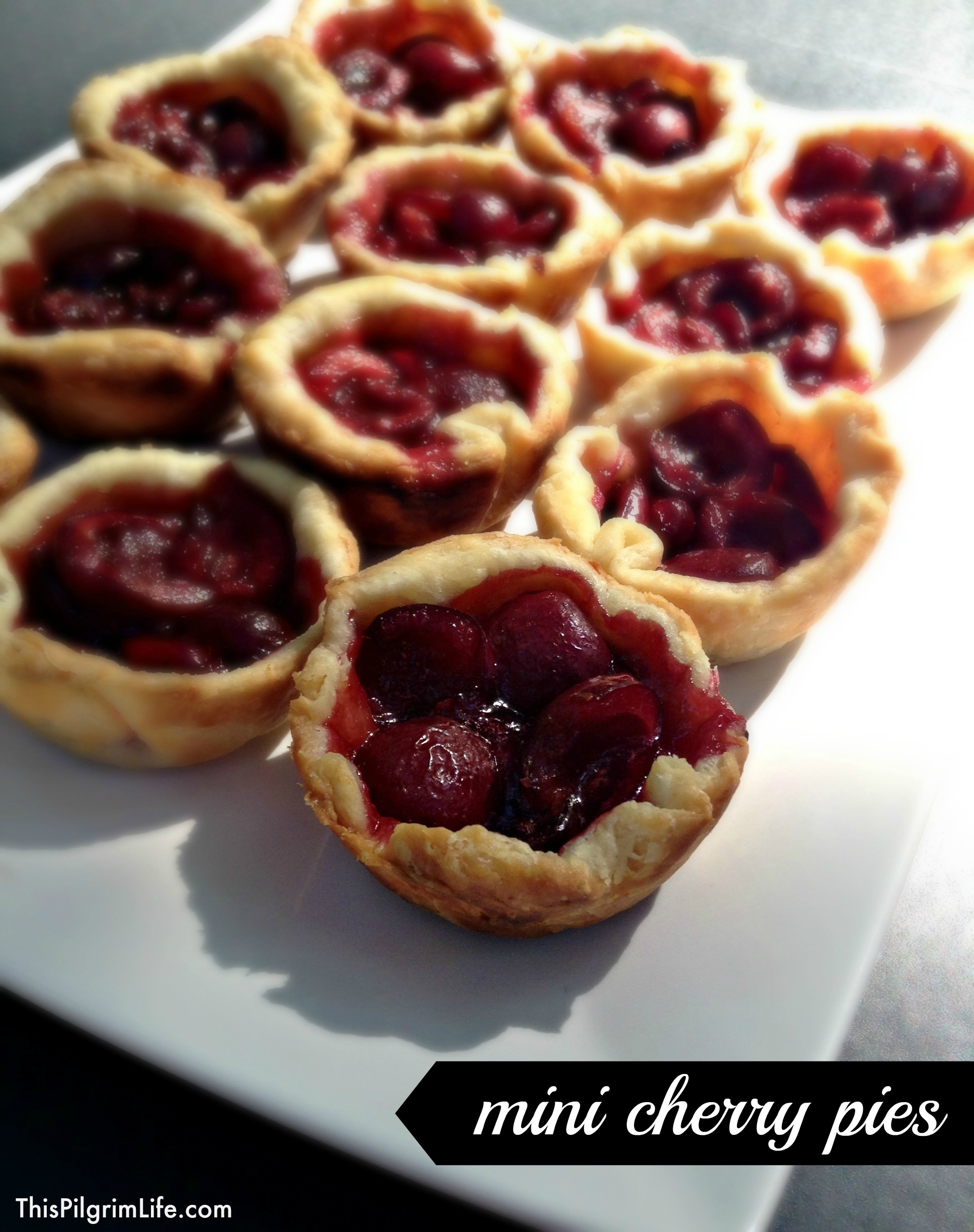 What is your favorite summer pie?