You are here: Home / Momlife / You Can Do Hard Things

Most of the time, when I am encouraging my kids to persevere and not give up it is in reference to picking up the toys which have spread across the house. Other times they might hear me say those words when they are attempting a new task, or learning an all-important skill like taking their pants off by themselves (“it helps to take your shoes off first…”).

They can be inclined to give up, to take the easy route, to pass the job onto someone else. Know the feeling? I do.

In those times I try to infuse perspective into the situation, reminding them that putting their toys away will help them find them when they want them again, and that they won’t want me undressing them as teenagers.

Such perspective relies on delayed gratification and a little imagination. So I am thankful for the times when more concrete experiences of perseverance and endurance result in an immediate reward. 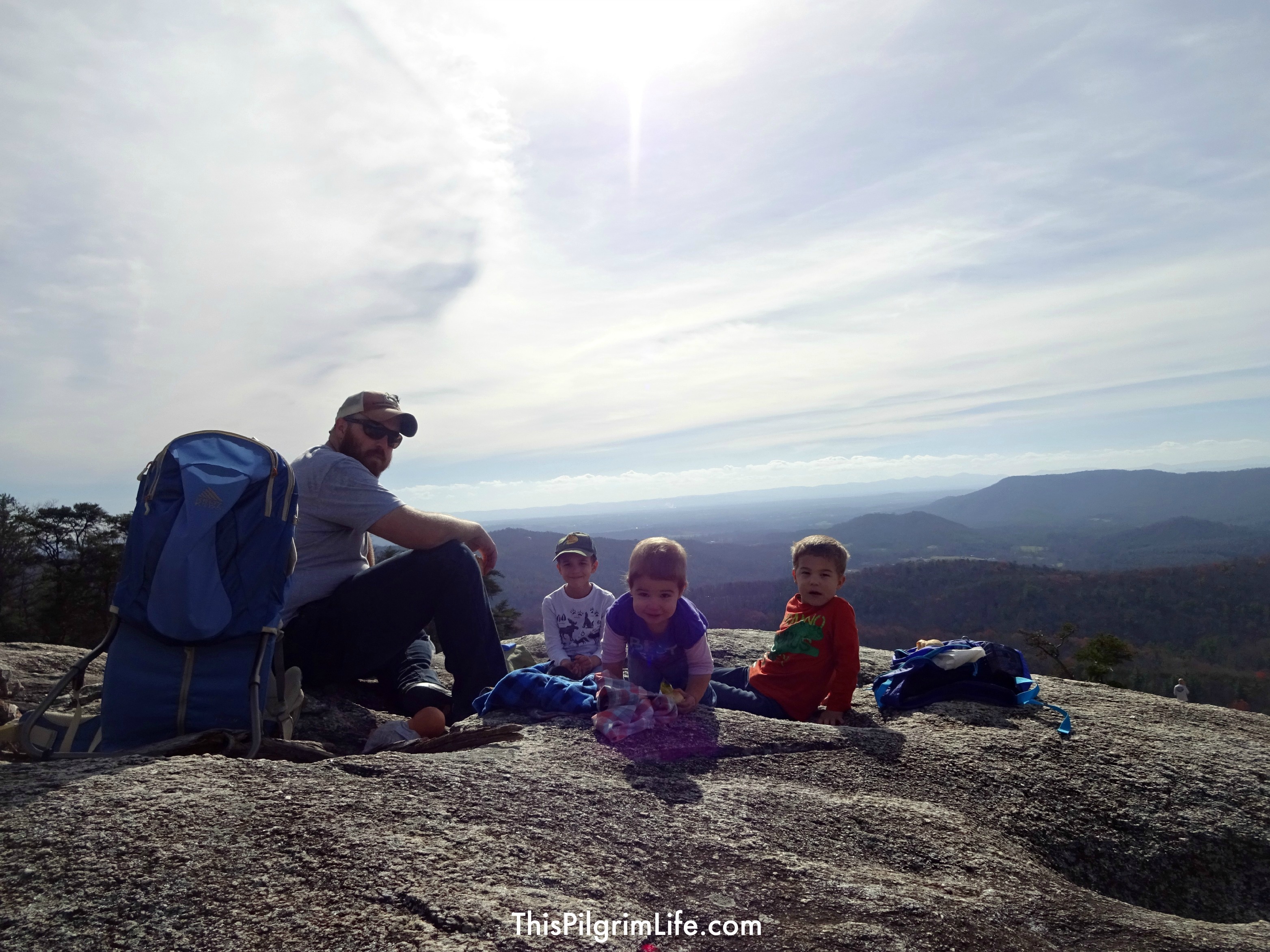 Yesterday my young sons’ little legs carried them all the way to the top of  Stone Mountain. Outfitted in hiking boots and packs supplied with water, food and nature guides, we all started the hike full of energy and confidence that this hike would be no thing.

Of course, our enthusiasm was slightly dampened when the toddler threw a fit and threw herself on the ground because mama didn’t want her carrying too much on the hike. But more on that in a minute. 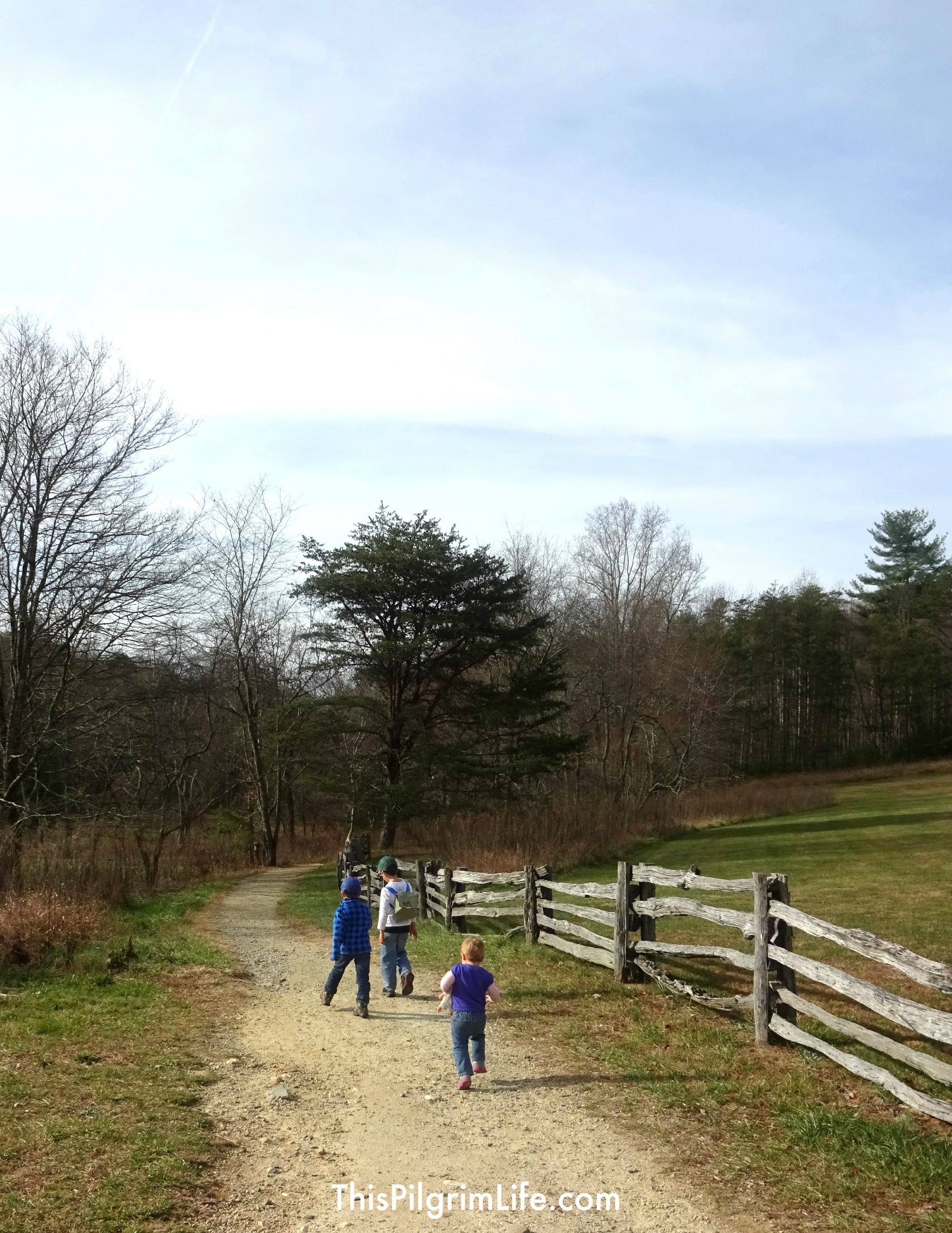 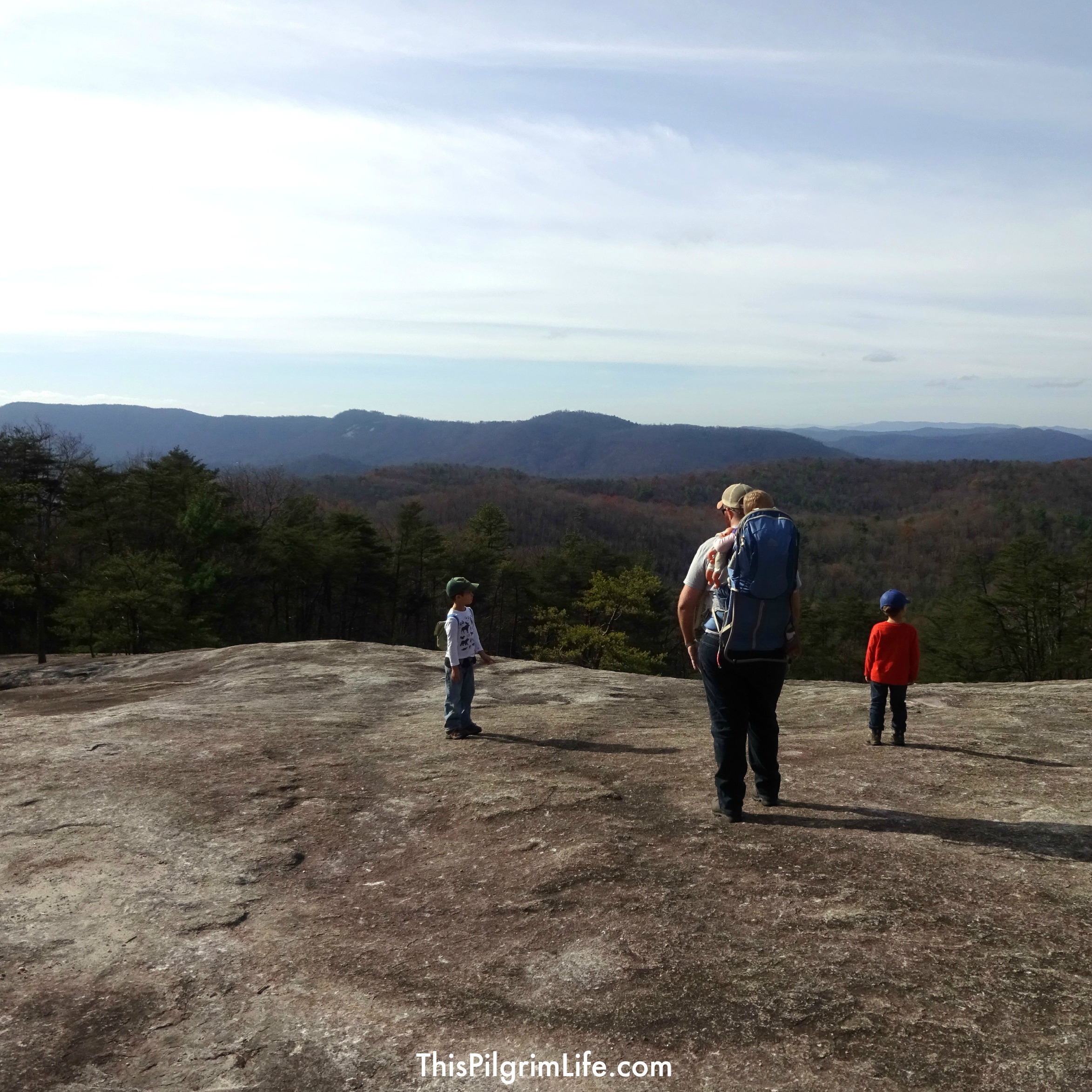 We all were doing fine for a while. My husband was carrying our daughter in the framed backpack carrier

(which, by the way, is so worth the money!). My boys and I were following behind, talking about how different the forest looks in the winter and collecting treasures we spotted along the way.

There were short stops to take a drink, admire a view, eat a quick snack. But it wasn’t until we were almost at the summit when the pleas to take more breaks and the cries of “I can’t do it” began to come in rapid succession. 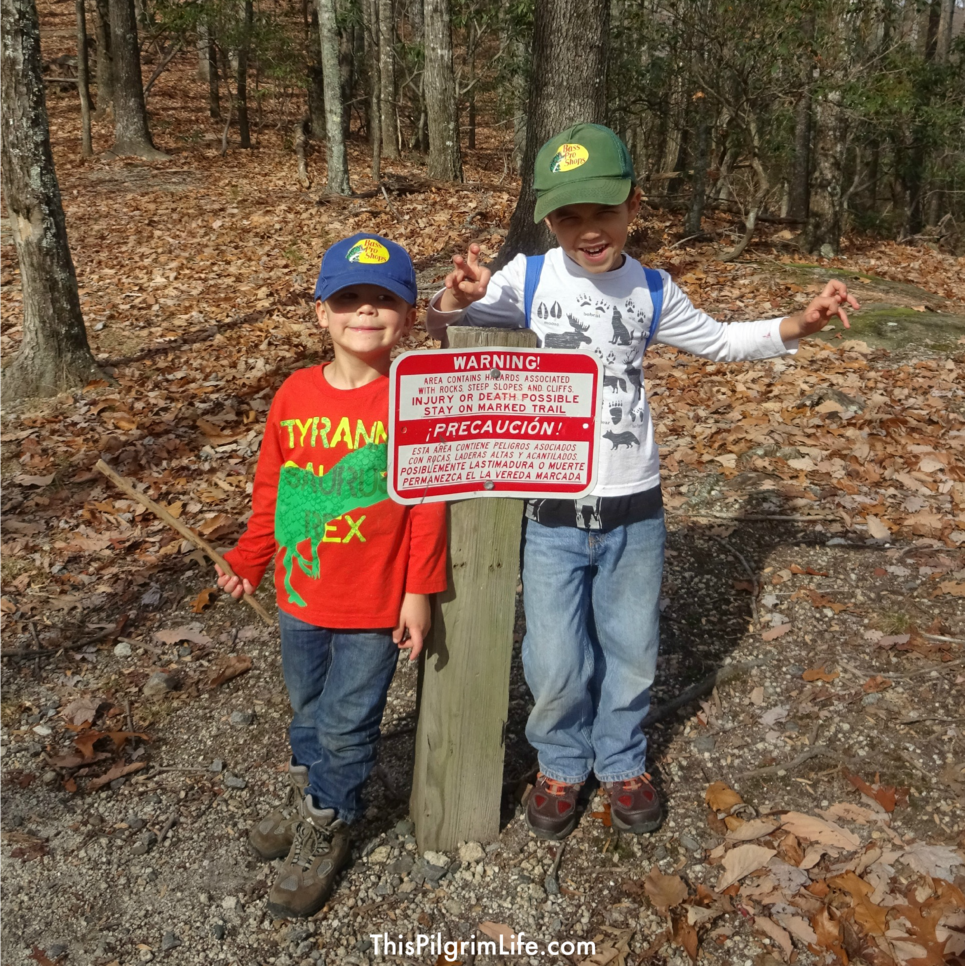 The trail at that point had turned into a steep climb, with several switchbacks. The kids weren’t the only ones feeling the burn.

The difference was that I had the end it sight and knew that giving up now, even if just for a short time, would only make finishing more of a challenge . More breaks would only make us more tired. I knew they had it in them and that the goal was both worth it and attainable. They can do hard things.

So, hand-in-hand, offering assurances and support, we made it all the way. And, just like we knew it would be, it was worth it. We picnicked on the rock face, explored the top, signed our names with charcoal found in a leftover fire pit. 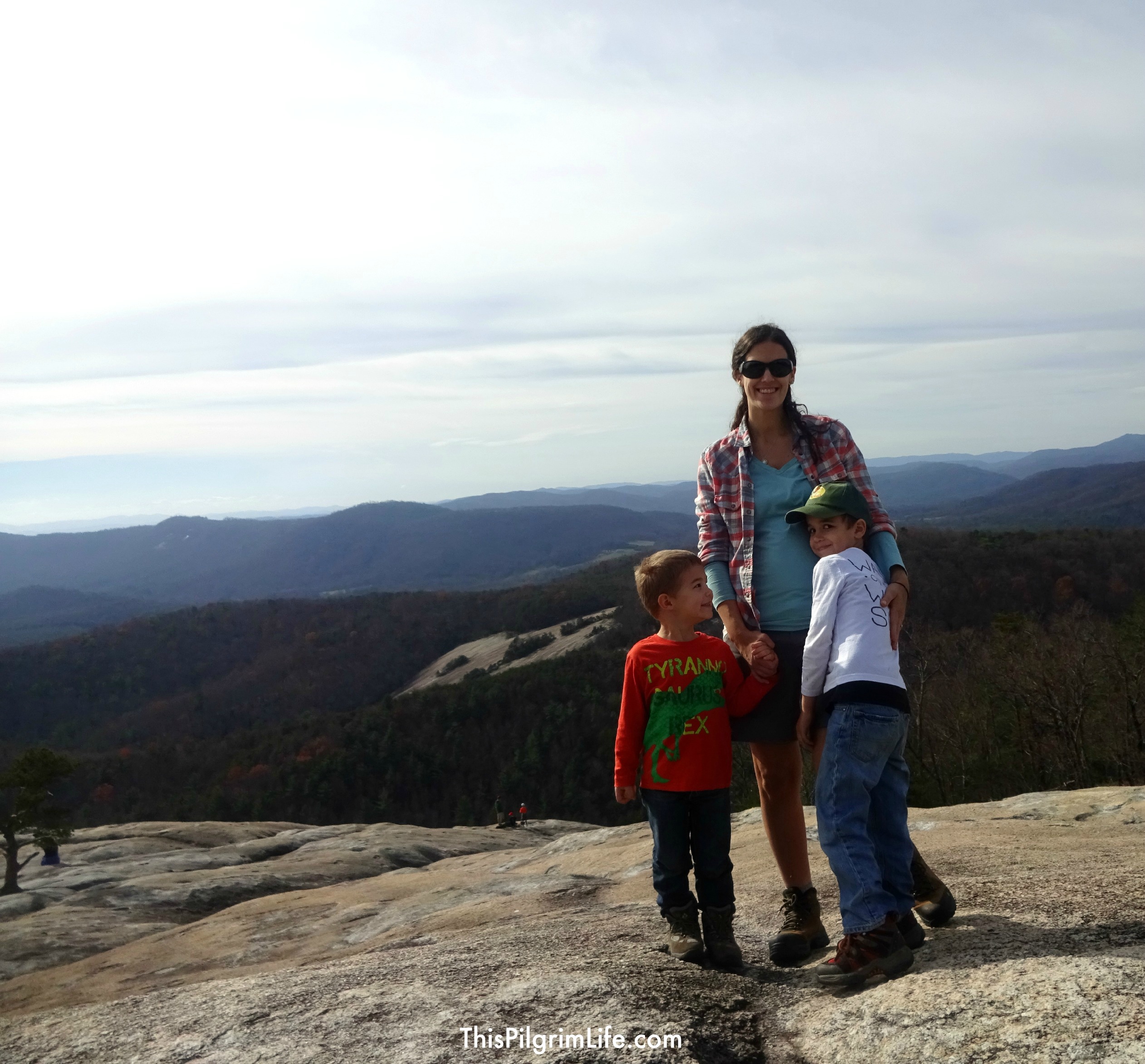 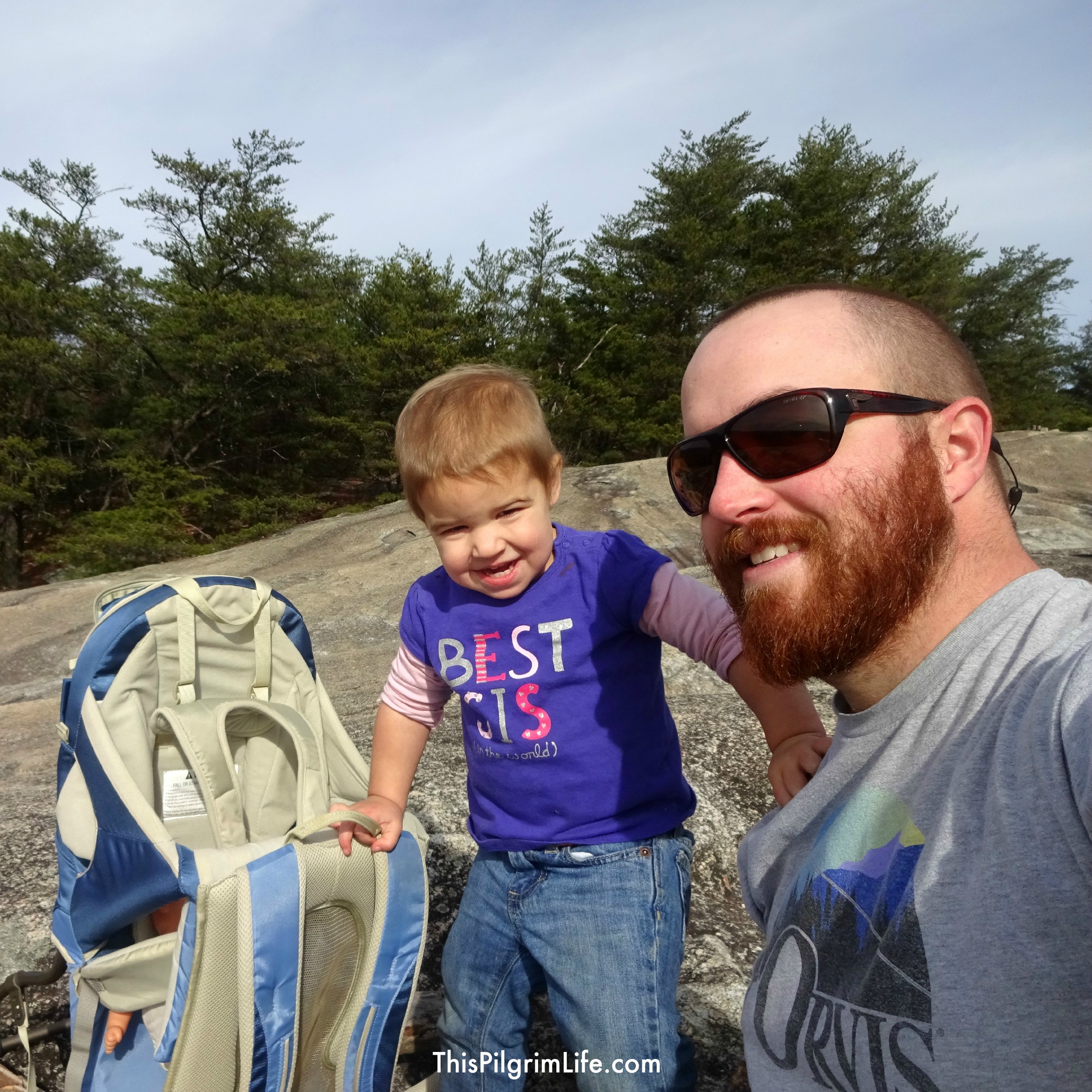 Have you ever noticed that the same encouragements, the same admonishments, which we give our children often point back upon us like a mirror? We may be older, we may have more experience– our struggles may take different forms– but at the root, the truth is the same.

You can do hard things. It is worth it. Don’t give up now. Persevere until the end.

I was reflecting on these things as we drove home from the mountain. My daughter is almost two, and is introducing us to new levels of tantrums and new decibels of screams formerly unfamiliar in our household.

Even so, we have been through this stage twice before with our boys, and though our daughter seems to have a greater flare for the dramatic, we know that it is possible to teach young children to obey, to use self-control, and to cease the flailing-banshee-behavior that is so common at this age.

I was reminded yesterday that taking the short cuts now, taking breaks from discipline, resigning ourselves because we are tired or weak– these things will not help us to finish well. Which, in this case, means coming out of this stage somewhat unscathed and with a child a little further along in learning how to listen and obey (to the end that she will one day be more ready to listen and obey God).

We can see the fruit of endurance and perseverance in our sons. The work we invested in disciplining and instruction is evident, albeit imperfectly.

Of course, this is only one instance of our call to persevere in our task as parents. It’s just the one that was fresh on my mind from our outing yesterday.

Is there an area in your parenting, your marriage, or outside of your home in which you are feeling exhausted and ready to give up? Maybe you’re just contemplating a short break from the work at hand.

Friend, you can do hard things. The climb may seem steep and your legs may seem weak, but the effort is bringing you nearer to the goal.

Again and again in the Bible, believers are told to remember the hope and to keep the end in mind. The work is hard now, but the hope is secure and the rest is eternal. 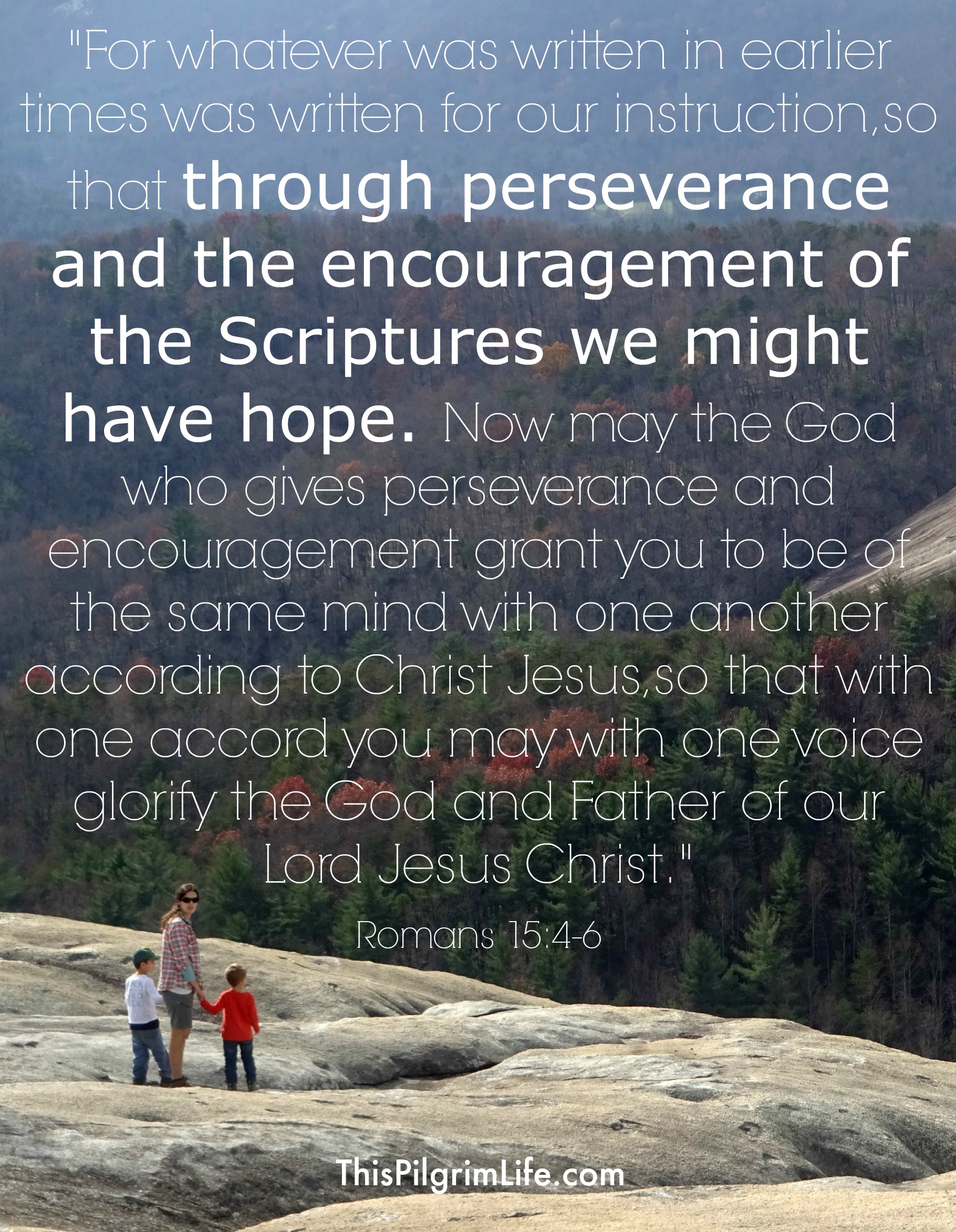 “For whatever was written in earlier times was written for our instruction, so that through perseverance and the encouragement of the Scriptures we might have hope. Now may the God who gives perseverance and encouragement grant you to be of the same mind with one another according to Christ Jesus, so that with one accord you may with one voice glorify the God and Father of our Lord Jesus Christ.” Romans 15:4-6

{{ I also read this post on taming toddler tantrums from Jess Connell yesterday. It was so helpful and came at just the right time. }}

What area in your life has you feeling weak and tired? Can you share a helpful perspective of how you’ve made it to the other side of a challenging season?

EACH WEEK I LINK UP WITH MOTIVATION MONDAY, MODEST MAMA, MAMA MOMENTS, TUESDAY TALK, AND WORKS FOR ME WEDNESDAY. THE LINKS ABOVE MAY ALSO BE AFFILIATE LINKS, MEANING I EARN A SMALL COMMISSION AT NO EXTRA COST TO YOU. I APPRECIATE YOUR SUPPORT OF THIS SITE!