You are here: Home / Family Life / The Verse Every Mother Should Memorize

This post was originally published at Embracing A Simpler Life, but when my six year old told me he was repeating this verse to himself the other night, I knew I wanted to share this encouragement here too.

No matter what season of motherhood, or life, you are in, this Bible verse is so important to commit to memory. It can mean hope and faith in both the little moments of our days, as well as during the valleys and struggles we face. 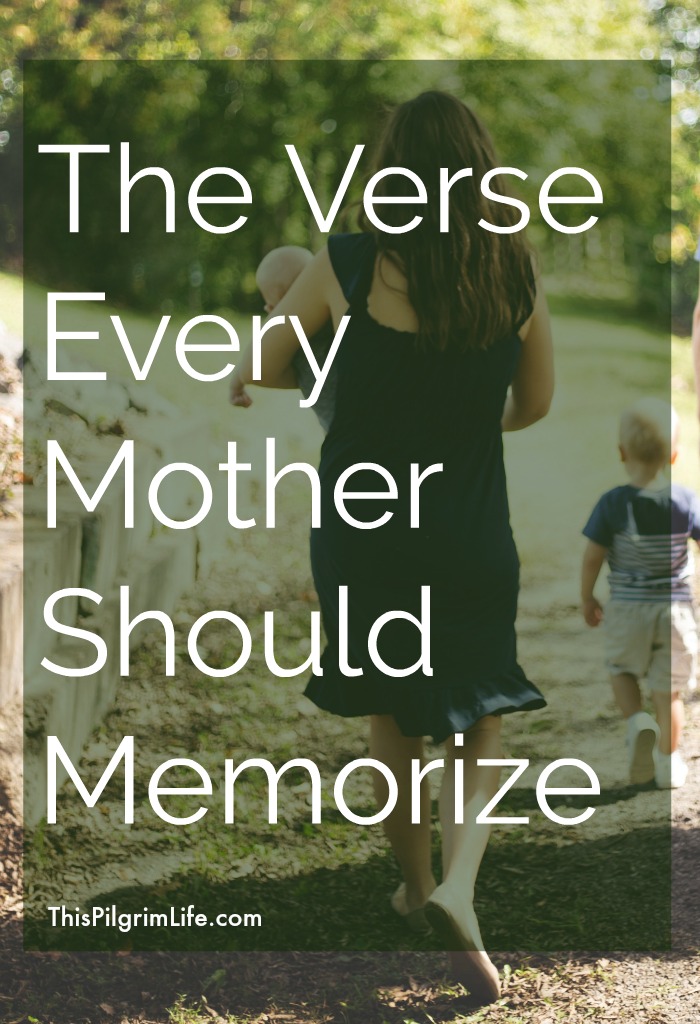 We went camping at the beach last Fall. Two parents brave (or crazy, depending on your perspective) enough to take four children 6 and under camping for a week. Would you believe me if I told you that we had a really great time?

For five days we ate outside, went on nature walks, and of course, played at the beach. We even brought along some of our school books and nature study materials so that we could do a few lessons in the morning hours.

There was one moment, though, that was not at all fun. It was one of those moments in parenting when you feel powerless and full of fear, but all you can do is wait and pray.

We were spending a day at the beach. Our daughter was playing in the wet sand near the water, my husband was fishing in the surf, and my baby was napping on my chest.

Our boys decided to take a short walk down the beach. We were not far from the pier, so I told them they could go as long as they didn’t go past the pier. Off they went.

They played in the sand for a little while, and then turned around to walk back towards us. One of the boys stopped and joined his sister. But our eldest son did not stop when he reached us. I was holding a sleeping baby and could not call out to him. I figured maybe he just wanted to walk a little on the other side.

But he kept going.

By the time I realized he was not going to stop and turn around, he was too far to call out to. I couldn’t go after him and leave my other two children, so I waved my husband up from the beach and told him what had happened.

My son’s shape was getting smaller and smaller as the space between us grew and grew.

Of course, my husband immediately went after him. At first, he was walking swiftly, trying to shrink the space that separated them and call out to him. But the beach was noisy and crowded, and it wasn’t long before he broke into a run towards our son.

The situation may not seem so bad now, but in the moment, I was scared about the what-ifs. I was not comfortable with our little boy being separated from his family.

There were several minutes when I could see neither my husband nor my son. All I could do was pray, and to repeat this short little verse over and over in my head.

They did eventually return. Turns out, my son did not see us when he walked by. He was frightened and feeling more and more lost with each step he took.

Fear is unavoidable in the life of a parent. It can show up when we least expect it; in small ways on the playground when they are little or in a sudden sickness. Fear can overwhelm all other emotions when we think about the future or we face our own brokenness as parents.

We love so deeply, so thoroughly, that we can forget that there is One who loves even more still.

Part of the struggle with fear is recognizing our own powerlessness. We usually cannot change the circumstances that fill us with dread. Otherwise, we most certainly would.

The only way to answer our fear is to look to God; our kind Father who works ALL things for our good. Yes, even bad, fearful things.

I was laying on the table looking at the form of my baby on the screen in the ultrasound room. My husband was with me and we were both relieved to see our baby’s little heartbeat. Everything looked good. To us.

But the ultrasound tech did not move on from our baby’s heart. Several minutes passed as she continued to shift the wand around trying to get a better look. The silence was deafening and my own heart was pounding.

This was our rainbow baby. After an ultrasound had revealed that our son had died not even a year before, just walking into the ultrasound room made me nervous. And from the moment the pregnancy test showed up positive months later, God had taught me about fear.

I peeled my eyes from the monitor and stared up at the ceiling. What-ifs never help. Instead of giving myself over to fear, I started to repeat this verse over and over in my head. It was all I could do.

She did eventually move on. Turns out, the ultrasound tech used to perform ultrasounds in a cardiologist’s office and has a special interest in hearts. She wasn’t aware of our loss, or the panic she was setting off in my heart.

The Verse Every Mother Should Memorize

We will all experience times of fear in motherhood. Some of us are already facing hard circumstances, many of us will find new temptations to fear even today.

What we do with our fear is what matters. Will we give in to anxiety? Let despair and worry rule our hearts? Will we let fear change the way we parent and how we teach our children how to face the world?

Or, will we parent in confidence? Not a confidence in our own strength, but in God who has promised to give us exceedingly above what we need (The same power that raised Christ from the dead!).

Memorizing this verse is not a magic pill. We cannot recite the words, click our heels, and instantly be transported out of fear and back into Kansas.

But Scripture is incredibly powerful because it draws our attention away from the temporal concerns right in front of us, and gives us an eternal perspective. It changes us.

Anyone can learn this verse (Psalm 56:3). We teach it to our children, too, and remind them often to turn to God when they are afraid.

Commit Psalm 56:3 to memory today, and ask God to help you learn to fight fear with faith. You’ll be glad you did.