You are here: Home / Momlife / Slowing Down Time and Speeding Things Up– It’s Good We Can’t Do Either 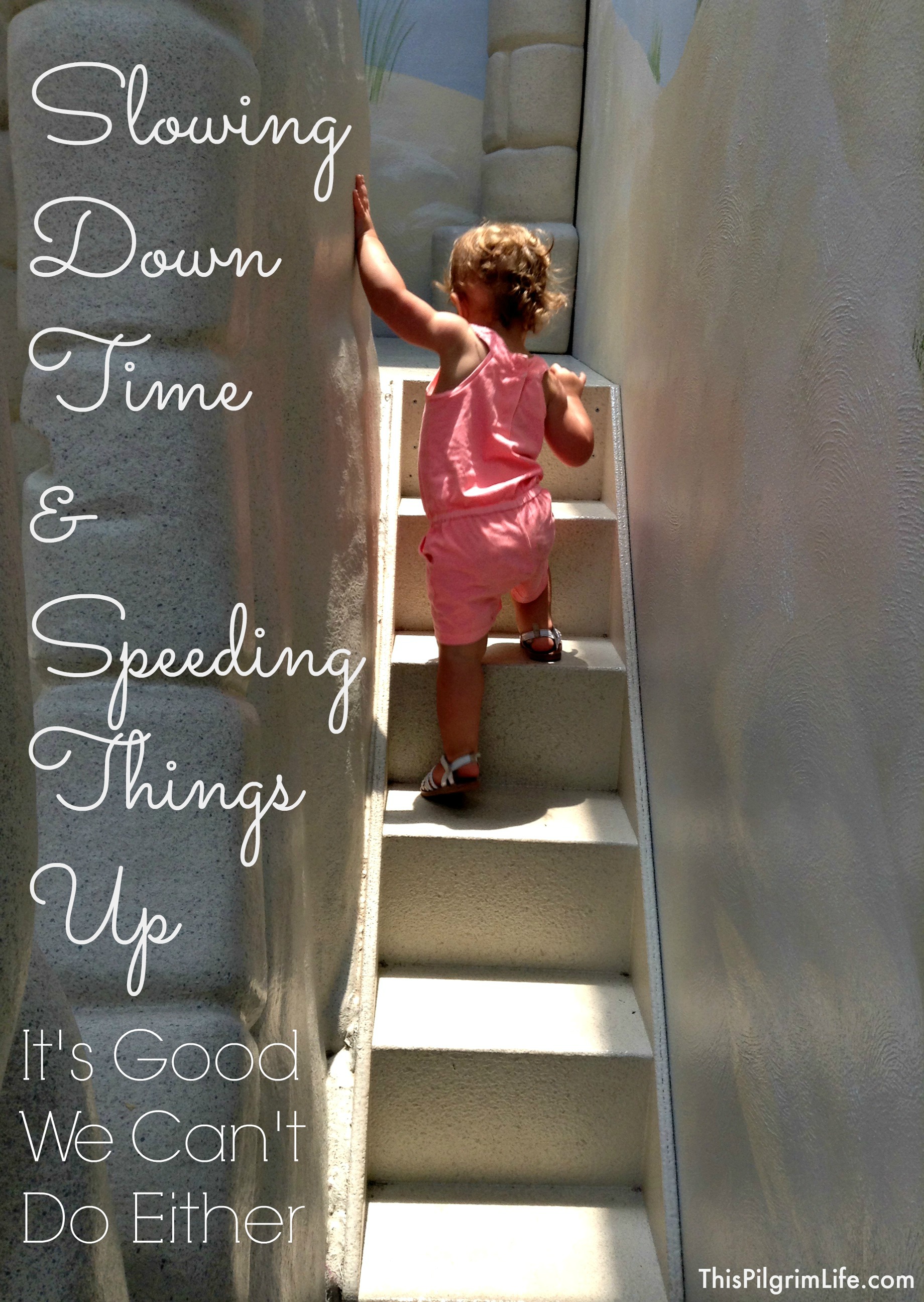 My daughter is in one of those stages. You know, the kind where you remind yourself that “this too shall pass” but then in the next breath hope and pray that it passes much sooner than later.

One habit initially had us all chuckling and remarking to each other about how weird it was that she had picked it up. We’re not laughing now.

Several weeks ago, we started noticing hair wrapped around her pacifier. As I would pull it off, I figured that it had simply gotten there from the pacifier being in my pocket or in my purse (because I’ve long since stopped worrying about sanitizing pacifiers– we’re building immunity).

It wasn’t long before we watched her odd little quirk in action and saw exactly why so much hair was collecting on her pacies. The routine was always the same– take pacie, rub it in hair, pull out hair touching pacie, return pacie to mouth, suck on hairy pacie.

Just a few days and a couple of closer inspections revealing the gobs of hair poking out from her pacifier mid-suck were enough to make this habit cross over from strangely endearing to NEEDING TO STOP NOW. 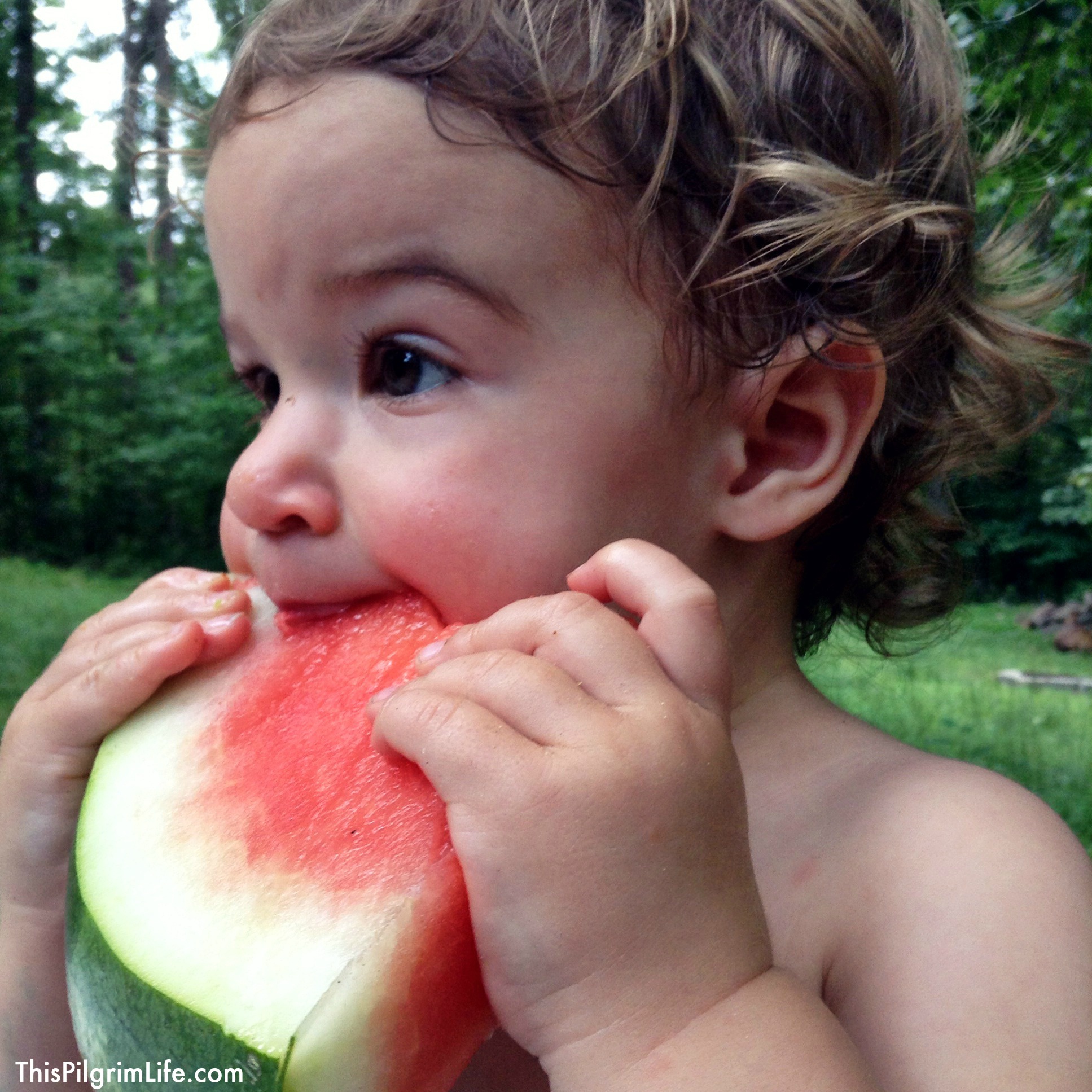 See those cute little curls behind her ear? All that’s left there is a bald spot.

Newsflash: the habit lives on and you don’t have to look very hard to see the bald spots growing on her once curly head. To hear my husband threatening a buzz cut on my first daughter’s head makes me cry a little on the inside.

Less on the superficial why-my-daughter-can-no-longer-wear-a-bow side of things, is another new habit we like to affectionately call “screaming like a banshee.”

Previously boy parents, the melodramatic screaming and screeching is new to us. I know that in large part, she is acting out of frustration of not being able to communicate well with us. Even so, our bleeding ear drums and throbbing heads hope that this too shall pass sooner than later.

In the meantime, we are charting new waters and starting down the lifelong path of helping her learn to reign in those girly supercharged emotions.

Why is there no more pie???!!!
#thestruggleisreal

The whole process has been admittedly exhausting, especially when the screaming is coupled with mealtime battles and refusing to eat. Figuring out what is stubbornness, what is picky eating, and what is simply a smaller appetite is a feat requiring serious mental fortitude.

On the other end of the spectrum is my middle son. At three and a half, he is at the age where I just want to bottle up everything he says and does so that I never forget a thing. The over-the-top affection, the endearing way he talks, and how he is constantly teetering on the fine line between big toddler and little preschooler– each almost bursts this mother’s heart on a daily basis. 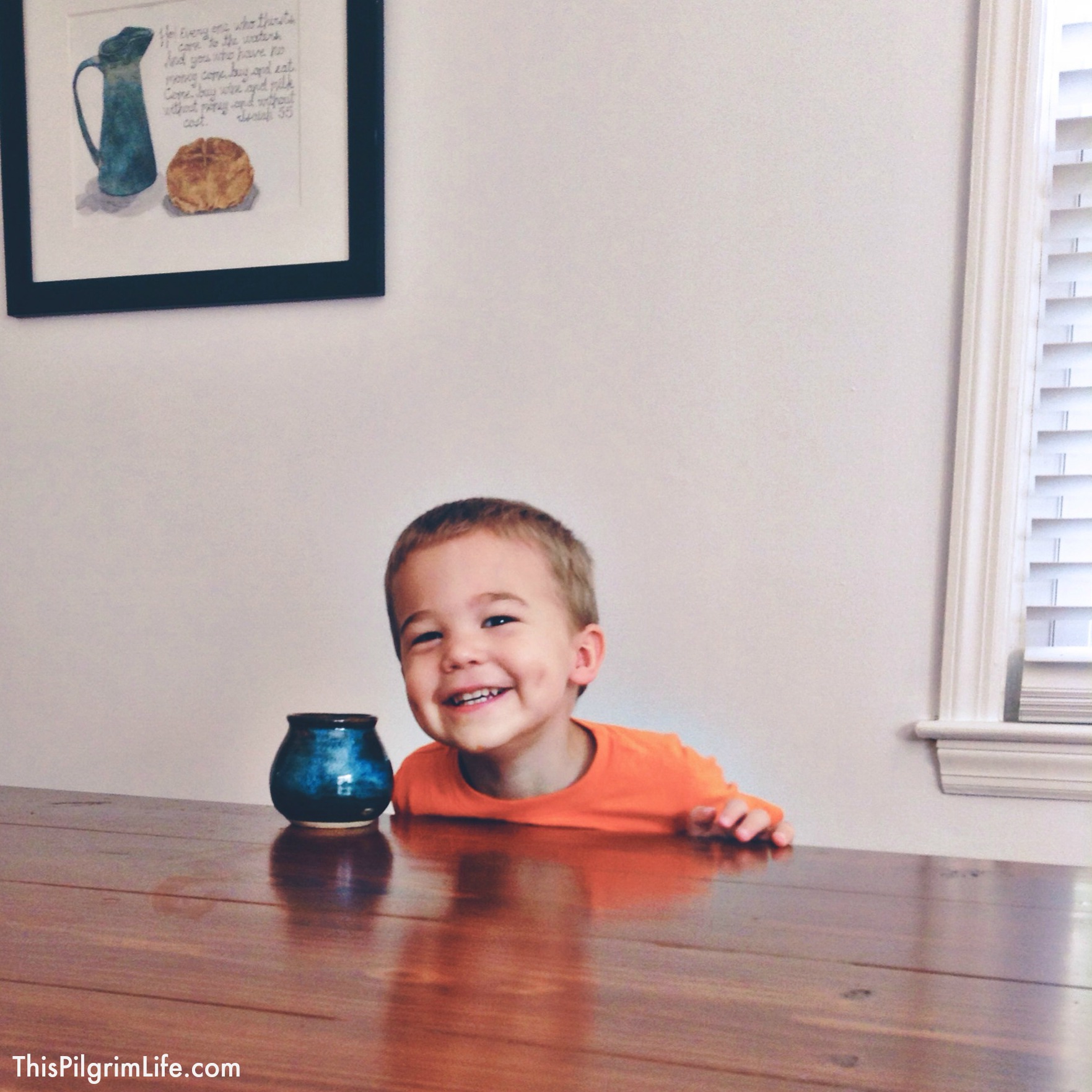 His dimpled grin melts me into a million pieces and I don’t think that is likely to change. But I am going to be sad when he loses his childish way of counting, when he can finally pronounce all his words without mixing up letters in the sweetest ways, and when he no longer wants to “huggle” any chance he gets.

Actually, I’m holding on to that last one as long as possible, even when he’s old enough to roll his eyes and tell me “huggle” isn’t a word and to please stop embarrassing me.

In this early morning as I write, he is curled up next to me on the couch with blanket and doll in hand. His bed is wet and so we are spending the quiet hour before the rest of the house wakes together. He mixes up his pronouns, tells me it’s wake-time because he sees the sun, and looks at me like I’m the best thing going in his life. 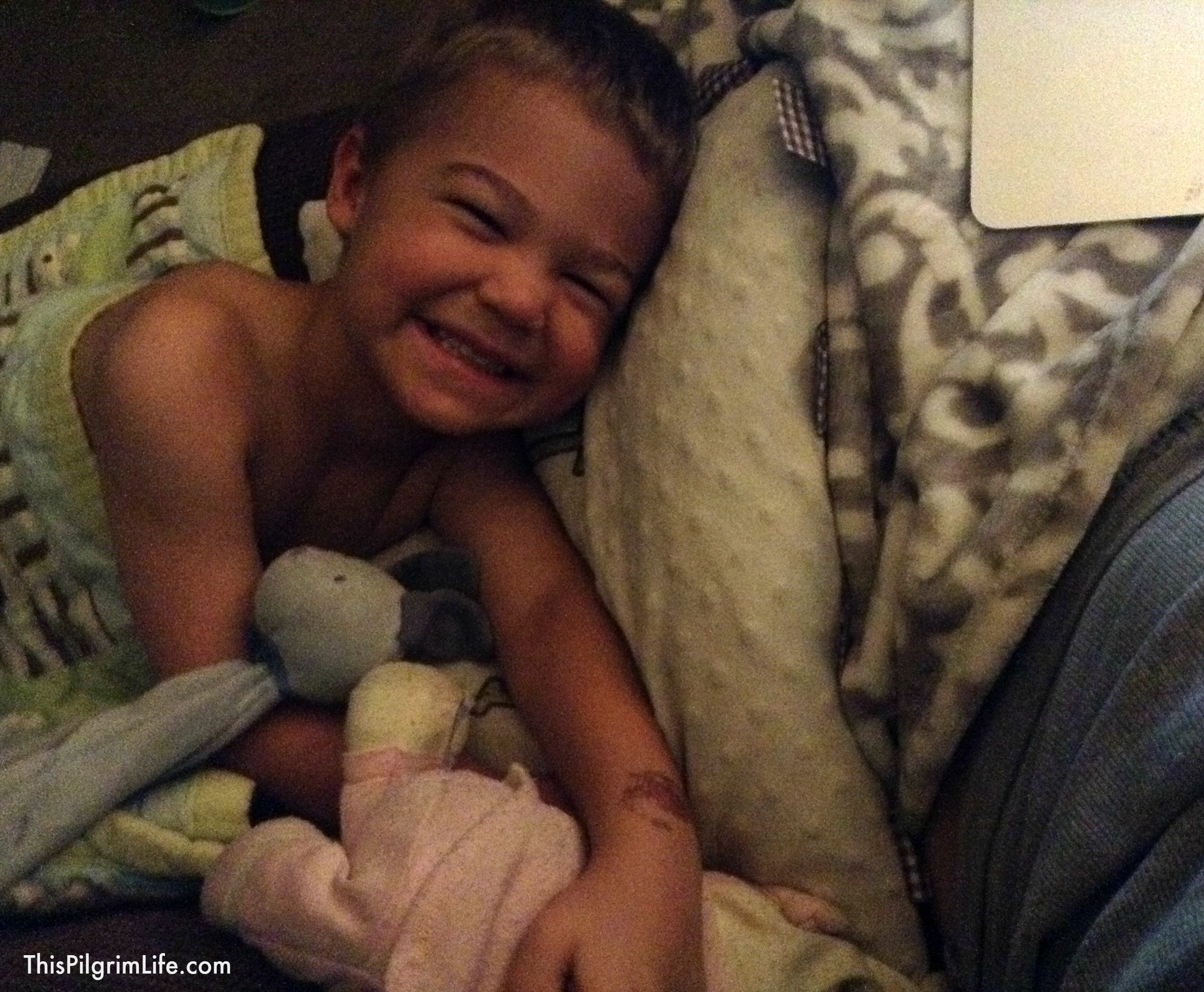 I’ve been joking with a close friend for a few weeks now that I’m going to write this post and call it “the best of times and the worst of times”.

But even as I look back at this short span of time when this post has been circulating in my head, I realize that most of the hardest things I was lamenting are already passing by.

I can’t wish away the difficult seasons.  They are the very ones that are refining me and working in me the patient endurance that I will need to possess to finish this mothering race well. They are the stages that are building character in my children. Without them, we would be both much smaller people.

And I can’t slow down the seasons that are full of so much grace and sweetness that it almost hurts to be in them. I must learn to sip and savor– to be fully present in these moments because they too will be gone long before I am ready.

The struggle and the joy, the exhaustion and the laughter, the bed-wetting and the sloppy kisses– all of these things are wrapped up together in a balance that is perfectly designed by the One who orders all our days.

Hang on, mama, and lean into grace. The seasons do pass and life is all the more sweet for their remembrance. 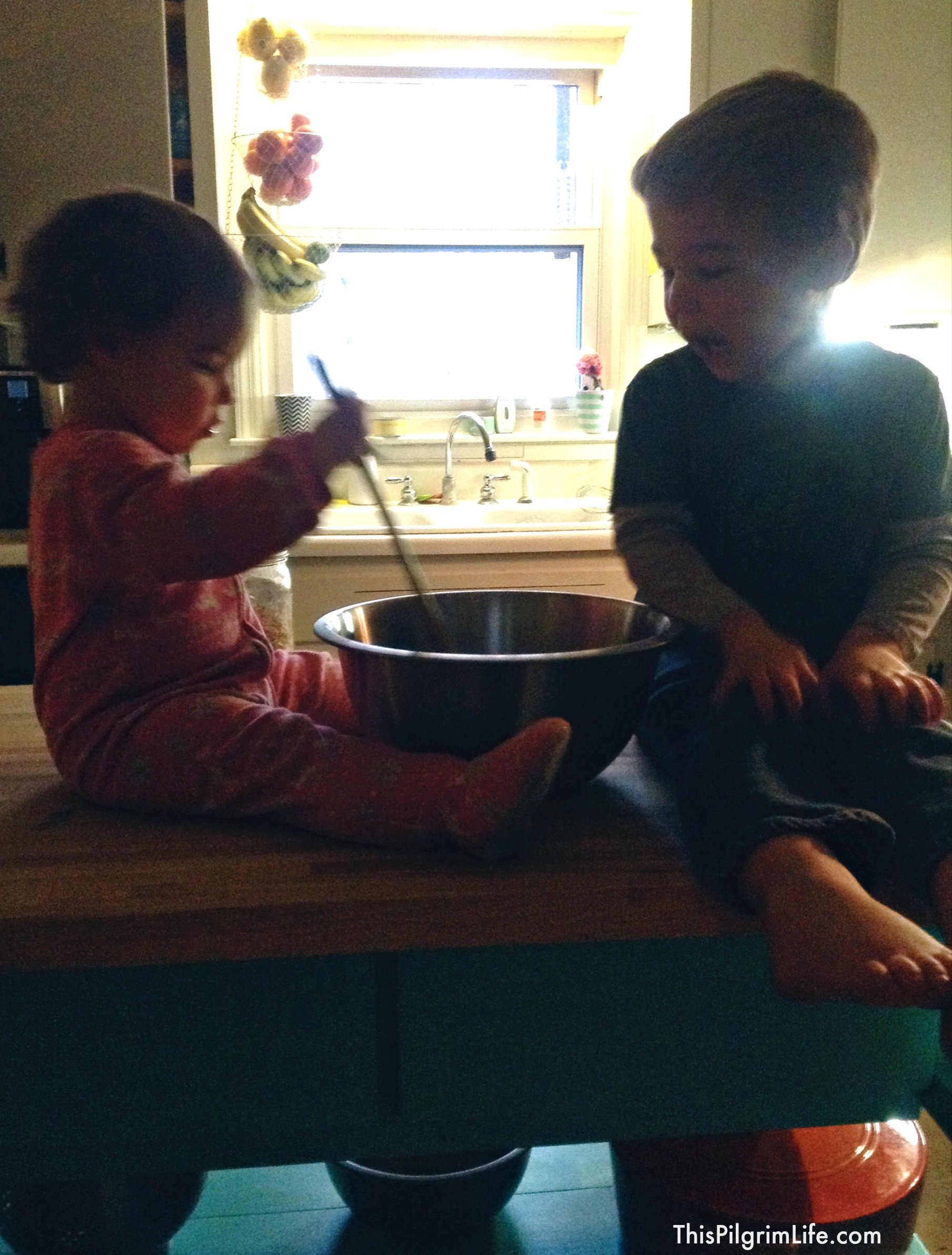