Shepherd’s pie is rich and filling and so delicious! Make it in the Instant Pot and save time and dirty dishes! 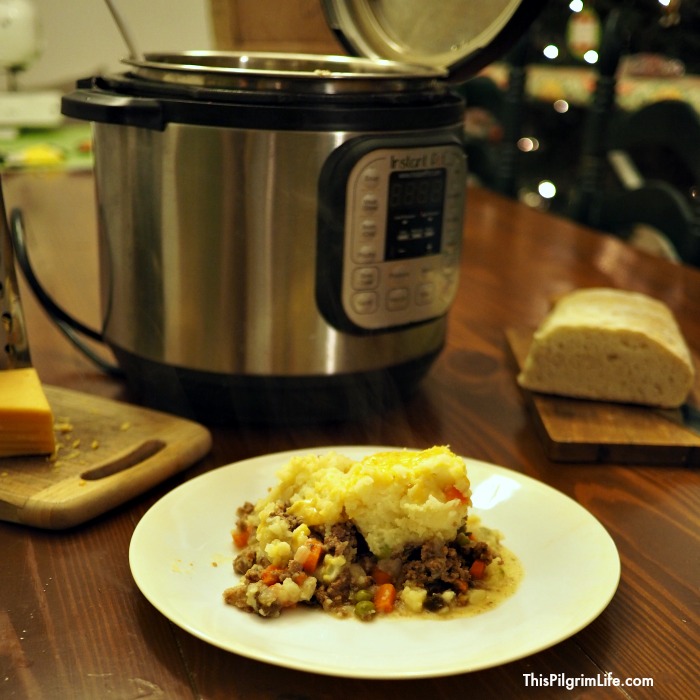 The best shepherd’s pie I have ever eaten was in a small British pub in Bermuda. We were the only ones in the pub and the shepherd’s pie was brought out steaming hot in individual crocks, along with the largest Guinness my husband and I had ever seen.

Obviously the food made an impression on us. One that even a quart of Guinness could not erase. But more than the amazing food we ate in Bermuda, when I think of my honeymoon, I think of putting around the tiny island on the back of a moped wearing goofy helmets, squeezing through narrow streets, riding through sudden showers, and generally embracing married life with the silly enthusiasm that has seen us through the last decade.

I have fond memories of our time in Bermuda. Though I will say that had we known each meal we ate would cost us roughly the equivalent of a month’s grocery budget, we would have been a little more careful about selecting our honeymoon destination. 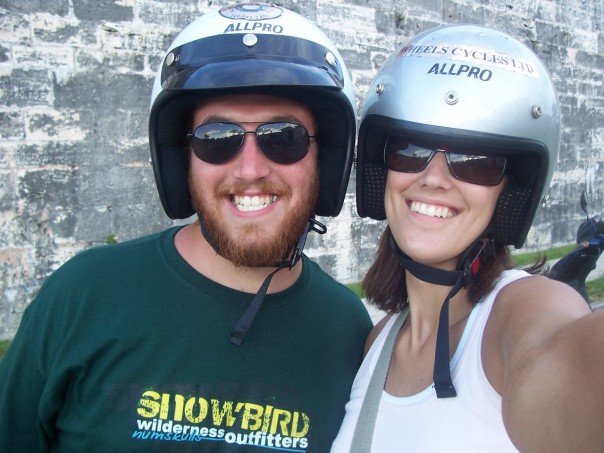 Since I am using my Instant Pot ALL.THE.TIME these days, I knew I would want to adapt one of our favorite recipes for shepherd’s pie to cook in my new favorite appliance.

There is nothing wrong with shepherd’s pie in the oven. That’s how we made it for years. I also have a great recipe to make it in a cast iron pan. Always delicious.

But, as with soooo many Instant Pot recipes, cooking shepherd’s pie in my IP means that I have one cooking pan to clean, and dinner can be made more quickly and effortlessly. And since I have an extra liner for my Instant Pot, I can just throw on a lid and put the leftovers right in the refrigerator. 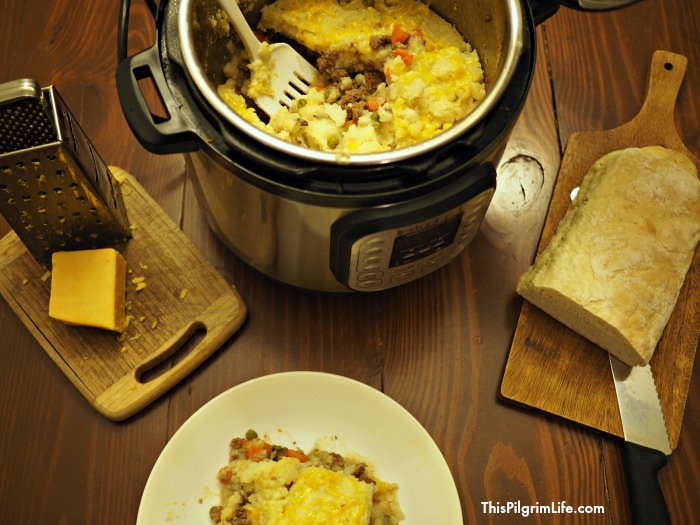 The shepherd’s pie cooks in two stages— first you cook the potatoes so they will be soft enough to mash. Then you cook everything (meat, veggies, & potatoes) together.

Either way, you end up with less dirty dishes and less overall cooking time. 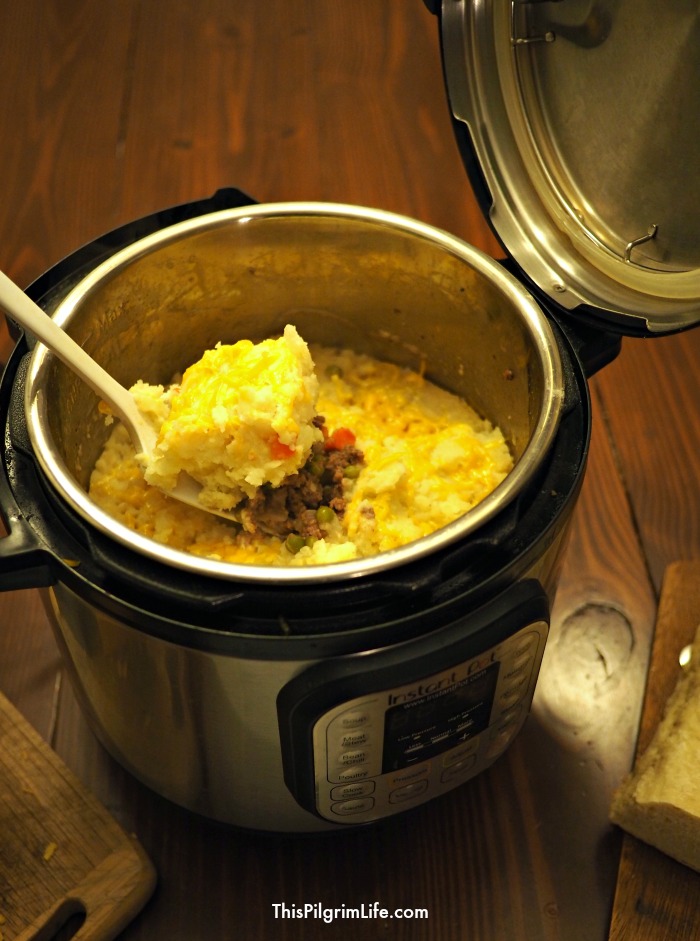 If you are not already following This Pilgrim Life on Facebook, take a moment and click to follow now so you do not miss any Instant Pot cooking videos (I shared a 5 minute video on honey roasted carrot soup in the Instant Pot today– so good!).

And if you haven’t already downloaded a free printable of the ten must-have recipes for your Instant Pot, you can get that here.

UPDATE:: As many people have noticed and commented, the Instant Pot does not always come to pressure with this recipe. However, the heat inside the pot is sufficient to thoroughly cook the Shepherd’s Pie during the cook time. We have enjoyed this meal many times, even without it coming to pressure! 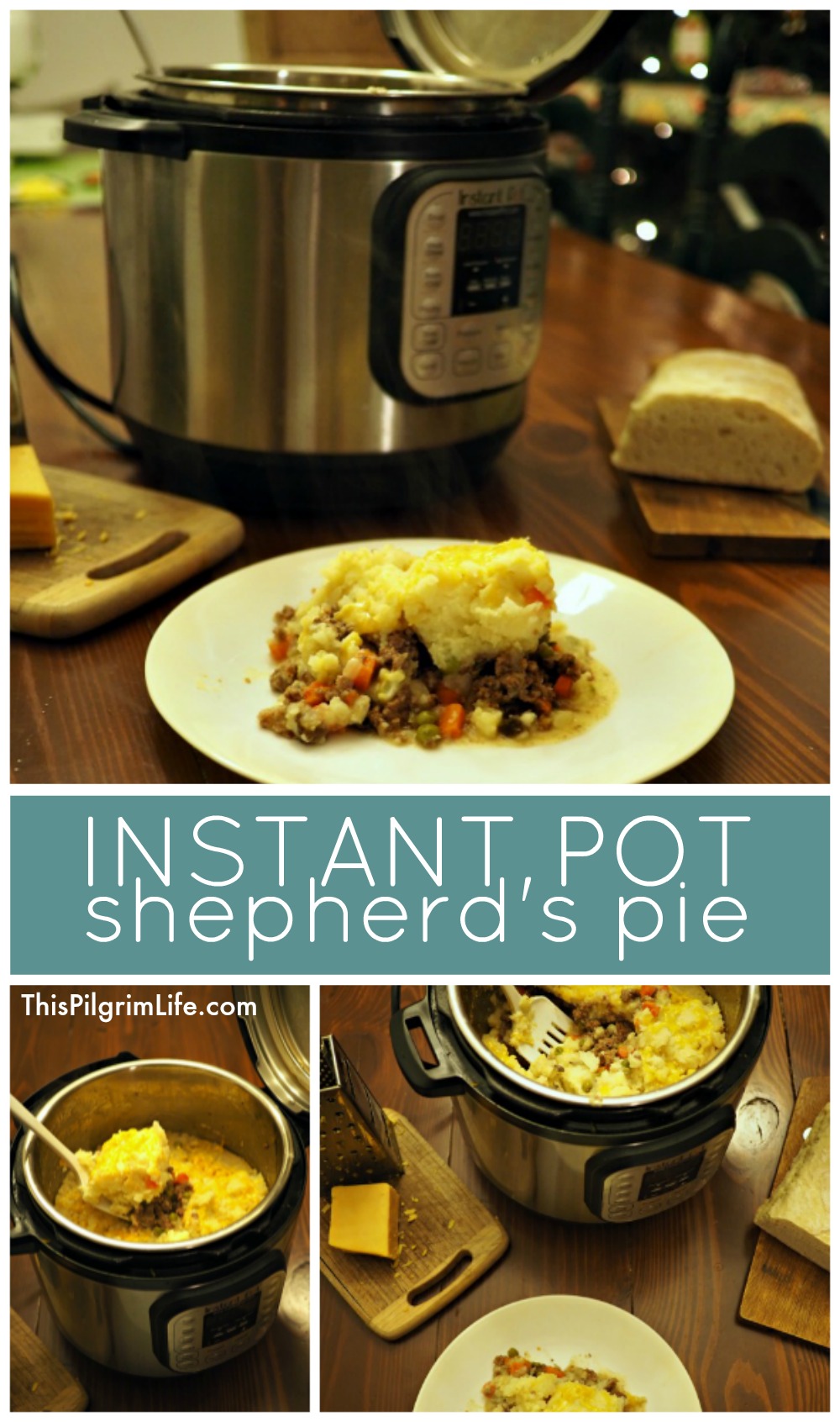 “I want to be super transparent and as helpful as I can be on the blog and on this Facebook page. I always try to share recipes that will be successful for everyone, but sometimes recipes don’t work as smoothly for everyone as I anticipate. This recipe for Shepherd’s Pie in the Instant Pot has been one of those recipes. Some people love it, others have commented that it’s runny or doesn’t turn out right.

…So I made it again last night, following the instructions to determine if I needed to adjust the recipe in any way.

Here’s how it went: The potatoes took 8 minutes to cook under pressure (about 8 to come to pressure first). I took them out and mashed them while starting the next step. I browned the beef, drained it, and then added the chopped vegetables, seasoning, and broth/flour combo. Gave it a good stir, and then plopped the mashed potatoes on top, leaving a rim around the edges of the pot. Covered the pot and set it for 10 minutes. It took about 15 to start the countdown timer, and actually came to pressure at 7 minutes to go. After it finished, I quick released the pressure and let it sit for ten minutes. Then we ate. It was delicious and the perfect consistency IMO.

If you decide to give this recipe a try, be sure to 1.) let your veggies thaw first if using frozen, and 2.) let the shepherd’s pie rest for 10 minutes before serving to give it a chance to thicken.

Watch a Facebook Live video on how to make Shepherd’s Pie.

1. Combine potatoes, 1 cup water, and 1 teaspoon salt in the Instant Pot. Cook on high pressure for 8 minutes. Drain the potatoes and transfer to a mixing bowl. Add 1 egg, 1 teaspoon garlic powder, and 2 tablespoons butter to the potatoes. Mash the potato mixture with a masher, or whip with a hand mixer. Add salt to taste.

2. In the now-empty Instant Pot, sauté the ground beef for 5 minutes until it begins to brown*. Drain the grease. Add the  worcestershire sauce, carrots, onions, peas, mushrooms, and 1 tsp each salt and pepper. Stir to combine. Mix together beef broth and flour in a small measuring cup, then pour the broth mixture into the Instant Pot and stir to combine again. Important: Deglaze the bottom of the pot by scraping with a wooden spoon to loosen anything stuck to the pot.

3. Top the beef mixture with the mashed potatoes and smooth the top of the potatoes with a spatula, leaving an open rim around the outside. Cook on high pressure for 10 minutes.

READ FIRST. This recipe has had difficulties coming to pressure for some people. Deglazing the bottom of the pot is very important to prevent issues. I have only had success with this recipe, and many others love it, which is why I am leaving it as is. However, for guaranteed best results, you can cook the shepherd’s pie pot-in-pot for the same amount of time. Simply transfer the meat mixture to a pot at the end of the second step, and then proceed with the recipe. Put the pot on a trivet over a cup and a half of water and cover before cooking. If you do pot-in-pot, reduce the ingredients by one half.

See them all on the Instant Pot Recipe page!

EACH WEEK I LINK UP WITH MOTIVATION MONDAY, MODEST MAMA, MAMA MOMENTS, TITUS 2 TUESDAYS, HIP HOMESCHOOL MOMS, AND WORKS FOR ME WEDNESDAY, AND 100 HAPPY DAYS. THE LINKS ABOVE MAY ALSO BE AFFILIATE LINKS, MEANING I EARN A SMALL COMMISSION AT NO EXTRA COST TO YOU. I APPRECIATE YOUR SUPPORT OF THIS SITE!