You are here: Home / Family Life / 5 Things We Can Do to Move Forward After the Election 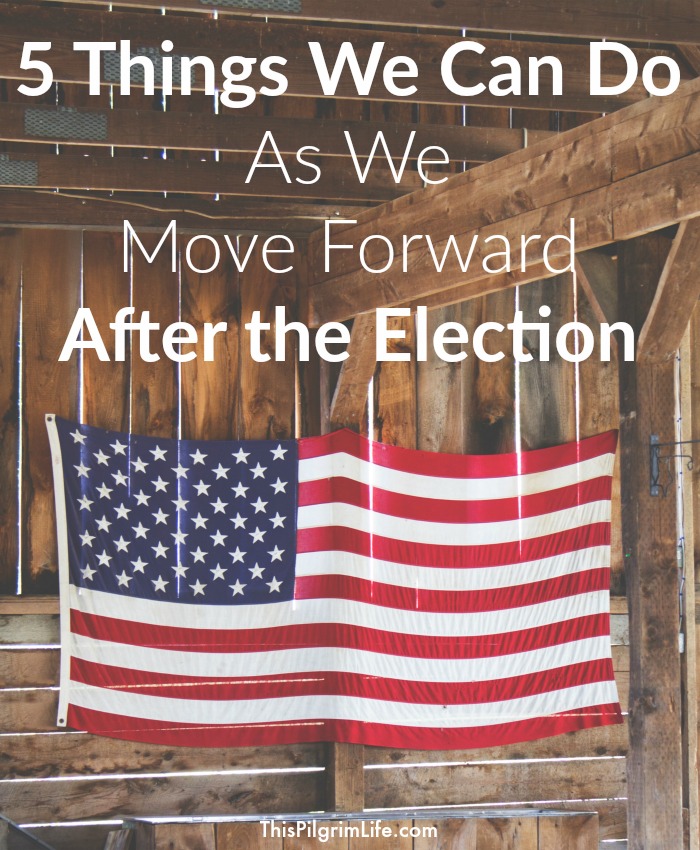 Were you in the #nevertrump camp or the #neverhillary camp? Or maybe you were in the #votingmyconscience camp. (Pretty sure I just made that last one up).

With all the #nevertrump and #neverhillary hash tagging that has gone on, we may have unwittingly let ourselves believe that the world is going to end if Donald or Hillary was elected POTUS. You may even be watching the election results coming in right now with a glass of wine (or big piece of chocolate cake, depending) in one hand and an open suitcase in the other as you prepare to move to Canada, just in case.

As of this writing, I do not know who won. But in a way, that is helpful because I can say with confidence that we can put aside the division and bitterness we have all experienced during this highly polarized election season and move forward towards more unity and hope.

Here are 5 things we can and should do after the votes are in.

“First of all, then, I urge that entreaties and prayers, petitions and thanksgivings, be made on behalf of all men, for kings and all who are in authority, so that we may lead a tranquil and quiet life in all godliness and dignity.” 1 Timothy 2:1-2

A dear friend of mine shared these verses on Instagram yesterday, with the encouragement to be careful we are not despising people God created or furthering an atmosphere which makes slander acceptable. It was a very timely word.

If we think things are bad now, perhaps it would be helpful to remember that Paul wrote these words under the reign of Nero– a ruler notorious for his licentiousness and persecution of Christians. And yet, we are told to pray and to be thankful for all men.

Do we believe that praying is more effective and powerful than a well-worded caption on social media? Or, do I believe praying is more important than a carefully written blog post? If we do, then of course we should be praying more often.

The most lasting changes are going to happen in our hearts and our homes and our communities.

You weren’t thrilled with our choices in the election this year? Me either. But we have the power to affect change where we are, regardless of which candidate ends up in the office.

If you want to see more integrity, more open-hearted hospitality to all people, more fiscal responsibility, more valuing of life for babies and mothers, more standing up for what is right, then it starts right where you are–with the decisions you make and the attitudes you imbibe.

All is not lost, nor will it ever be while Jesus is reigning and there are people pursuing Him and holiness. 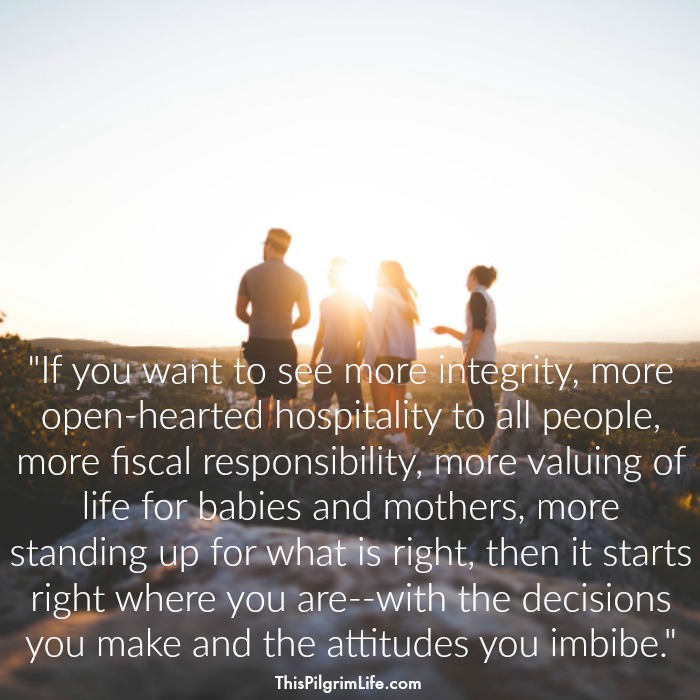 You know that picture on Pinterest of the t-shirt that is overly large enough to fit over two quarreling siblings? It’s a kind of forced reconciliation, but the general principle is a good one.

Learning to love each other in the midst of disagreement is a valuable lesson.

This election season was extreeeeemely divisive. Between friends. Between families. Now, there is nothing wrong with division and differences. I am thankful for the opportunity to cast a vote, and to be able to draw a line between what is good and what is not. But the manner in which we disagree is important.

The vote is cast, the results are in. It’s time to remember what we are collectively thankful for and focus on the things that unite us. Let’s extend forgiveness where needed, be gracious winners or losers, and remember that we can do much more working together than we can fighting against each other. 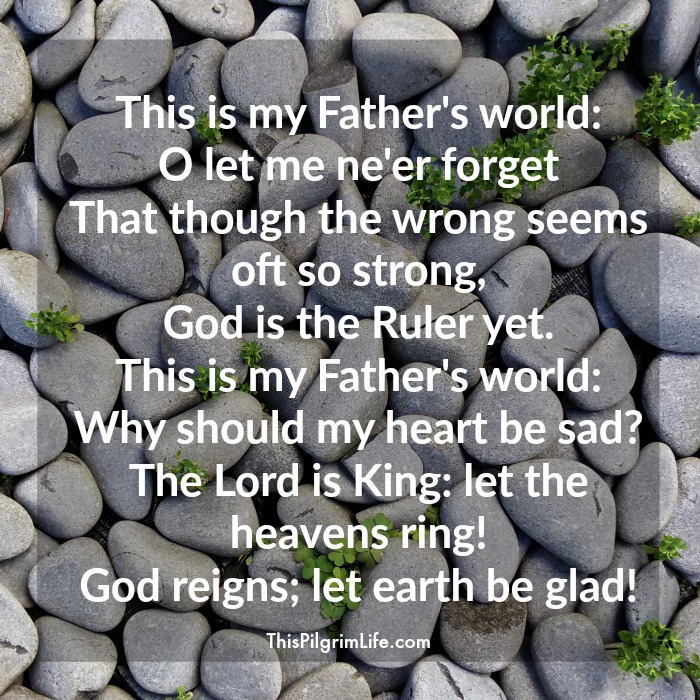 4. Remember whose kingdom you’re in.

There was a LOT of doom and gloom prophesying going on by both sides. According to my Facebook feed, our country is doomed regardless of who won.

The despairing predictions certainly were a lot to contend with at times. It all got to be a little overwhelming, didn’t it?

But Christians have the benefit of a perspective that spans an infinitely greater period of time than the next four or eight years. In fact, it extends past even our concerns for the next generation or the one after that.

Our hope is not in whom is elected, but in the One who has already won the battle, secured our salvation, and who is both reigning over all and sustaining all things right now. We can be confident that His purposes cannot fail, that His Church will overcome, and that love and truth can never be constrained by bad laws or corrupt governments.

“The Lord reigns, let the earth rejoice; let the many islands be glad.” Psalm 97:1

5. Be faithful to the local church.

On Sunday afternoon, we had a church meeting to discuss church family life. One thought in particular has stood out to me since then.

As our nation continues down a road seemingly headed towards less freedoms and certainly further away from any sense of biblical morality, the local church is increasingly more vital for our spiritual health and endurance.

Participation in and commitment to a local group of believers is a safeguard for our souls. The church is the place where we come together to rejoice in Christ. It is where we find encouragement to press on.  It is also the place from which we go out to live intentional lives for the spread of the gospel.

So in this post-election season when you are tempted to be discouraged or anxious about the state of our nation, remember that it is the church, not our country, that is an eternal entity.

Work towards pursuing faithfulness and unity as a body, and strive together to make Jesus’ name known among all peoples for the glory of His name.

As I sit here thinking of how to best close this post, I can hear my six-year-old singing in his bedroom. He doesn’t know the whole song, so he is repeating the words “We have a sure hope, we have a sure hope” over and over.

The song is from an album based on the book of Romans, and the rest of it goes like this:

“Not present things nor things to come,

Can change His sovereign plans,

Can stay what He commands,

Can change His sovereign plans of love.

And nothing can separate us from His love.”

Amen and amen. Go with grace and confidence in your sure hope, friends. All will be well.

(Not sure about a sure hope? There’s good news that beats out the most hoped for election outcome by a landslide).

EACH WEEK I LINK UP WITH MOTIVATION MONDAY, MODEST MAMA, MAMA MOMENTS, TITUS 2 TUESDAYS, HIP HOMESCHOOL MOMS, AND WORKS FOR ME WEDNESDAY, AND 100 HAPPY DAYS. THE LINKS ABOVE MAY ALSO BE AFFILIATE LINKS, MEANING I EARN A SMALL COMMISSION AT NO EXTRA COST TO YOU. I APPRECIATE YOUR SUPPORT OF THIS SITE!